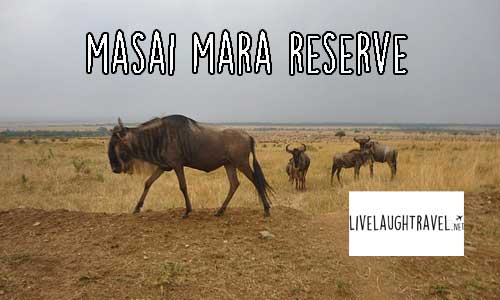 In the second part of our 4 part Africa Series, our Singapore Travel Blog would be covering the widely popular Masai Mara game reserve which is a must visit in Kenya.

The Masai Mara game reserve is a vast open plain with distinctive flat topped acacia trees. It is in south western Kenya and is basically a continuation of the Serengeti in Tanzania.

The Masai Mara is named after the Masai people who are the inhabitants of the area. The Mara River is the point of crossing between the Serengeti and the Masai Mara. More than 2 million herbivores cross this river annually in search of pasture and water. Though the Masai Mara is not the largest game reserve in Kenya, it is the most famous due to this spectacle.

A safari adventure in the Mara is set in the rolling plains where the big five can be easily spotted. It is also the place to be if you want to watch one of the natural wonders of the world; the wildebeest migration.

Wilderness camping in permanent tents in the natural environment comes together to for an unforgettable safari experience.

Getting to the Mara

The park is nestled in the Great Rift Valley, 224 kilometers from Nairobi. It is about a 5 or 6 hour drive from the capital. For the most part, the road is great but gets bumpy as you get closer to the park and father from the capital. Flights are also available which may last 45 minutes at the most.

The migration happens in July when the animals come into Kenya, then again in October when they leave. The months in between are the best time to visit the Mara game reserve.

If you are more interested in seeing the big cats, visit the Mara anytime between December and February. This is the dry season and the cats will usually be out in the sun though the Masai Mara is an all year round destination to see the big five.

Herds of topi, zebra, and wildebeest and Thompsons gazelles are residents in the areas but millions more migrate into the area and occupy it from July to October. These animals are usually followed closely behind by their natural predators including hyenas.

Hippos and Nile crocodiles are also residents of the Mara River.

The Mara is also home to the Masai giraffe and the roan antelope which can rarely be seen elsewhere.

The Mara covers an area of 1,510 km2. Because of the vastness and the amount of animals available to be seen, a visit to the Mara should be at least four or five days long.

The Mara predator project catalogues and monitors all lions in the area and encourages guests to take photos of the animals during game drives. An online database is available which gives users information about the individual lions as well as information on past and upcoming projects.

The park is also a research centre for the spotted hyena.

Entry fees into the park for non adult residents are USD$80 or $30 for children. The Narok side of the Mara has numerous tented camps and lodges where Tourists can stay.

Rangers patrol the area regularly and vehicles are controlled around animal sightings to allow for a better viewing experience.

Balloon safaris are also available on request for a cost.