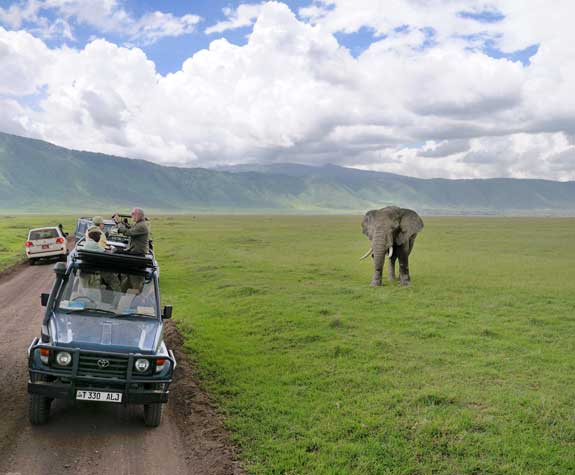 In the last of our 4 part Africa Series. Our Singapore Travel Blog teamed up with our African friend Leah to bring to you the beauty of Tanzania.

Tanzania has impressive game parks and national reserves. It is home to exotic palm beaches on the islands of Zanzibar and the dramatic wildebeest migration as well as Mt. Kilimanjaro, the highest mountain in Africa.

Tanzania is a country in East Africa. English and Kiswahili are the countries official languages though there are more than 100 different languages spoken in Tanzania with most educated Tanzanians being tri- lingual at the very least.

The savannah is the premier wildlife viewing spot and densely concentrated populations of animals call the vast plains home.

Wildebeest, gazelles, lions, leopards, cheetahs, the elusive white rhino as well as elephants, cheetahs and a myriad of other animals live in the national parks in Tanzania. The Seouls Game ranch in Tanzania is larger than Switzerland and largely untouched by humans other than the occasional game drives and safari camps.

For those looking to get off the beaten path and view chimpanzees in their natural habitat, Mahala or Gombe stream in the west of Tanzania will provide you with more than you ever dreamed of.

Those with the energy and the time can spend a week ascending the snow capped Mount Kilimanjaro and watch the breathtaking sunset. Humid and hot Dar-esalam or cool at night Arusha, Tanzania’s climate differs depending on where you are. Their seasons are either wet or dry signifying either the rainy season or dry season. Tanzania has two rainy seasons, one short from October to December and the long rains from March to May.

Anytime between June and August is a good time to visit Tanzania. It is just after the rainy season so the parks are green and the weather is great. Because this is a time of plenty, visiting parks may not be too rewarding as the animals do not need to congregate at any one spot so as to feed.

January to February is a good time to come watch the wildebeest migration as they make their way back from the Masai Mara in Kenya.

The migration is one of the natural wonders of the world. Millions of herbivores cross the Mara River into the Serengeti in search of pasture and water.

How to get there

A tourist visa costs USD$50 for 3 months and can be bought at the airport after landing in the country. You may have to wait a long while especially if its tourist season and three international flights have arrived at roughly the same time as your flight has. Buy your visa before you leave your country if possible.

If you decide to drive, keep left. Experienced “right hand drivers” need a day of driving around to get used to the change. Your best option if you decide to rent a car is a 4×4 with good road clearance. Mini SUV’s such as Rav4 and the Honda CRV are not as great at negotiating the bad roads.

If you want to go on a game drive, hire a car with a driver to take you through the reserve. Most guides speak several languages and know the terrain better than you do. Bedsides, don’t you want to just enjoy the scenery and take photos?