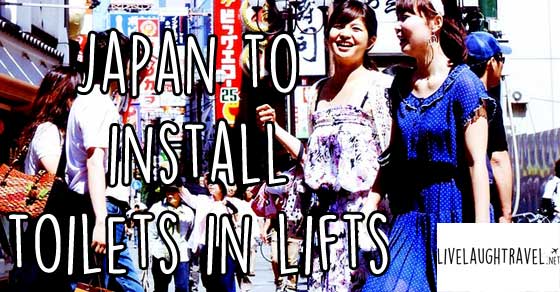 Japan has been known for all things bizarre. From weird game shows to out of this world inventions, but a recent proposal might just top the list, only this time, it isn’t for TV show ratings or merchandise pricing, it’s actually to save lives.

An earthquake of 8.1 magnitude on the richter scale (similar to the Earthquake that hit Nepal and left thousands dead) happened 543miles (874km) outside Japan last Saturday and was felt throughout the entire country. The quake resulted in a small number of injuries from falls and power cuts around the country, including their Shinkansen (Bullet train) and lifts.

This unexpected stop of electricity resulted in 20,000 lifts to cease working with a handful of them stuck between floors. While this particular quake left some people trapped in the lift for over an hour, it falls short in comparison to the 2011 Fukushima quake that resulted in 3 of the country’s 6 nuclear reactors to meltdown, where some people were trapped in the lift for over 9 hours.

Researchers and seismologists have predicted that it would be likely that a very big quake would hit the capital in the coming decades which would cause an estimate of over 17,000 people to be trapped in lifts.

As such, the country’s elevator and infrastructure ministry have come together and discussed the possible addition of portable toilets and drinkable water in lifts to prep for such an occasion.

While the initial thought of it sounds absurd, the intentions behind it is definitely applaudable. I for one don’t know how they would be able to contain the smell or solve the limited space issue the lifts in Japan already face, but I’m sure the Japanese would figure it out like they always do. So don’t be surprised if you read our Travel blog in the near future and see us taking a selfie while taking a dump in the lift when we make our yearly trips to Japan in the near future 😉