Namiseom and Petite France is no stranger to most following its fame after the highly popular Korean drama Winter Sonata and My Love from The Stars.

While it might be daunting to some, to travel a long way out of the city not knowing what to expect, with the multiple trains and bus changes in between, but that’s what our travel blog is here for, so that you can learn from all the times we got lost so you don’t have to 😉 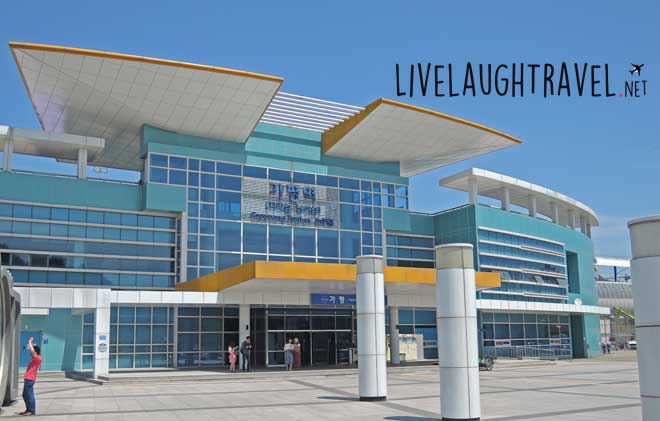 To get to either Nami Island or Petite France, you actually have to get to this train station called GAPYEONG station. But the issue is GAPYEONG Station isn’t on the usual subway line and is run by a private company called ITX. So instead, you would have to first get yourself to either Cheongnyangni or Yongsan via the normal subway line and change over to ITX from there. And because you would have to travel all the way out of the City to Gapyeong, we generally encourage our friends and family to visit both Nami and Petite France as they are still considered relatively close to each other.

1. Get to CHEONGNYANGNI/YONGSAN Station via normal subway

3. GAPYEONG Station to Namiseom Wharf (or you can just tell the driver “Nami Island“) via Bus or Taxi (approx. 5 mins)

4. Zipline or take a boat from the Wharf (*check video above) into Nami Island and spend half a day there

5. Ferry back out from Nami Island to the Wharf

5a. If you are feeling really adventurous there’s a 55m Bungy jump located 2mins away from the Wharf.

The slightly more complicating part about getting to Nami/Petite France comes from wanting to fully utilize your day, which means having to catch the right timing for the ITX-Cheongchun train to GAPYEONG Station.

As train timings are fixed and there are a specific number of passengers allowed on the train, you may make reservations on your seats online via http://www.letskorail.com/ebizbf/EbizBfTicketSearch.do

All train schedules are displayed 1 month in advance, so you may make reservations ahead of time and plan your day. 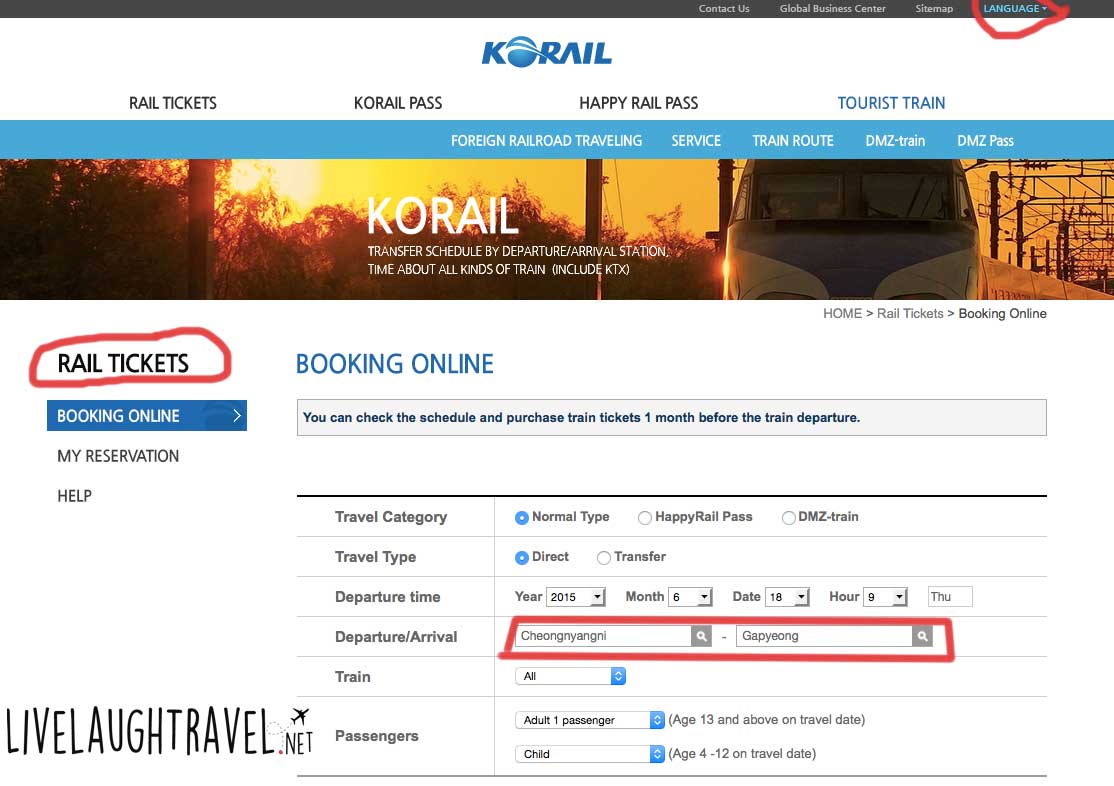 (Note: Make sure your page is on “Rail Tickets”, and you may change the language settings on the top right corner of the page)

We strongly encourage you to make reservations prior as the tickets do get sold out pretty fast. If you intend to only purchase your tickets on the day itself, you might find yourself waiting hours at the station just waiting till the next available train.

Trains do usually arrive on time, so once you’ve made reservations with the specific seat number do head to the platform early so that you wont miss your train!

Once you’ve arrived at Gapyeong Station, you’ll see a bus stop on your right directly outside the station, which is the “Gapyeong Tour Bus” specific for tourists, which cost 5,000 won/pax (excluding admission to tourist sites). It follows a specific tourist route with fixed tourist destinations, which covers quite a few places within Gapyeong. If you are do NOT have a specific plan, you may choose to go for this bus tour as it brings you to various places including Namiseom Wharf and Petite France. However, do note that the guide only speaks Korean. 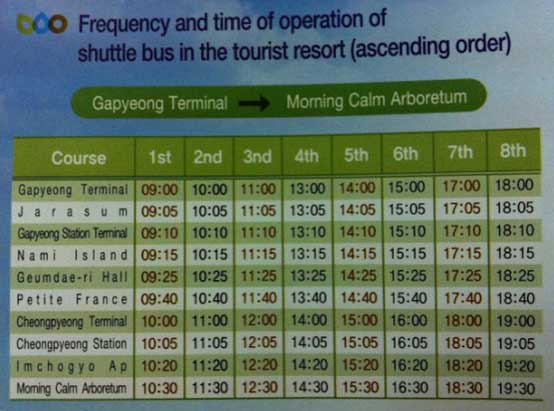 If you are like us and don’t prefer to follow tour groups, you can walk ahead and cross over to the bus stop across the road, that is the bus-stop for the public buses and alight at Namiseom Wharf.

Lucky for us however, we were traveling in a group so taking the cab was the most cost efficient for us and it only took less than 5 minutes from Gapyeong Station to Namiseom Wharf. When you’re here, for the more adventurous soul, you may opt for the Zipwire. and Zipline into Namiseom, but at a price tag of 38,000 won/pax, which includes the entrance ticket to Namiseom and the return ferry ticket. But do note that due to the amount of people in queue, you don’t usually board immediately. After you purchase your tickets, you would have to return at fixed times for your turn.

For the rest of the faint hearted individuals, there is the ferry that ferries people across to Namiseom, and it sets off approx. every 15-20 mins. A roundtrip ticket plus entrance costs 8,000 won and would take appx 5 minutes to take you across the river before you’ll set foot onto Namiseom (Nami Island)! 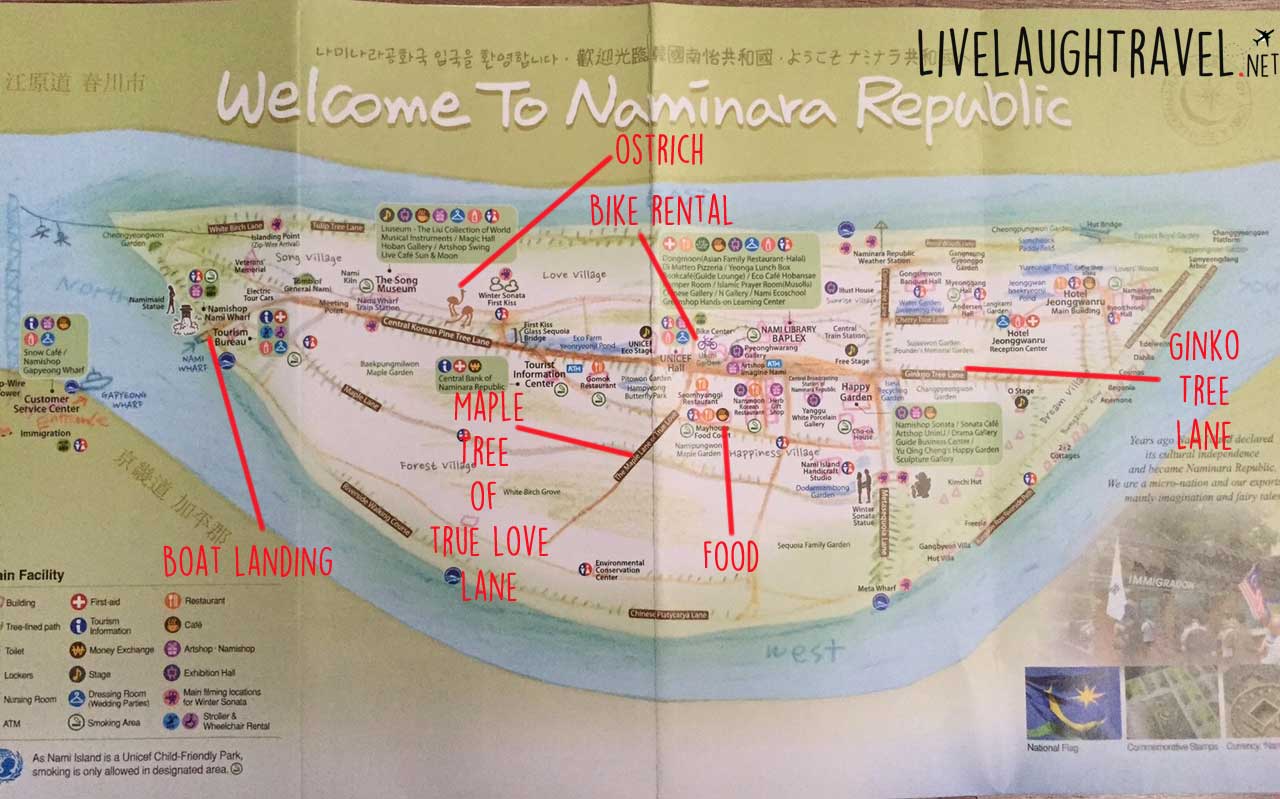 We personally reckon to set aside 2~3 hours on the island as we think it would be enough to allow you to cover most of the island. The main attractions (rental, food etc) here can be found in the middle of the island, a 7mins walk from where the ferry drops you.

It is common to see people moving around on bicycles or an electric tricycle whilst on the island. Rentals can be found in the middle of the island. 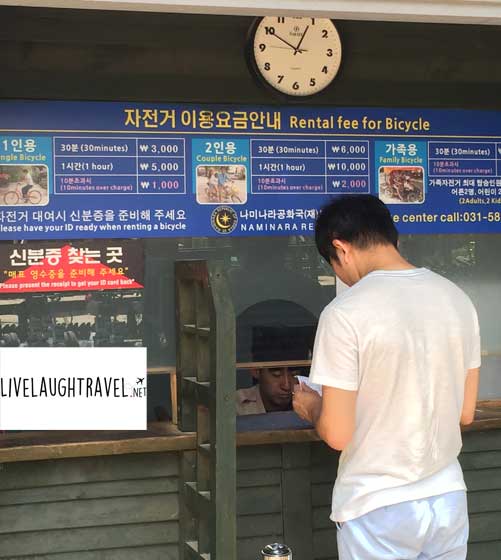 If you’re on a bicycle, it might take you less than 30 mins to cycle around the entire island to have a feel of the place. One main focus of this island would be the various tree lanes, which is a hotspot for photographs! Our personal favorite would be the “Maple Lane of True Love” and “Gingko Tree Lane”. If you’re a K-drama fan, you’d know the various scenes that have been shot here for Winter Sonata, and for all die hard fans of the drama, there is a Namishop Sonata and a Winter Sonata statue for you to get souvenirs and snap photos for remembrance! 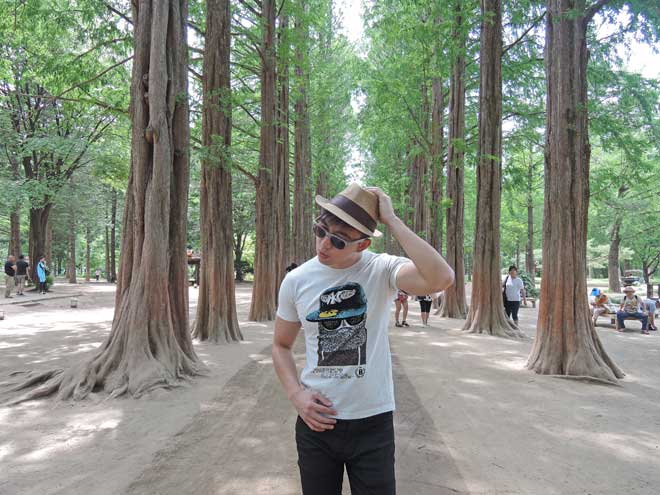 There are various restaurants here that offer reasonably priced food (traditional Korean food/BBQ). You may choose to have lunch here before heading back to Namiseom Wharf and continue your way to Petite France.

The return ferry docks for a longer time to wait for passengers to board the ferry. You may have to wait for as long as 20 mins before the ferry leaves to cross the river. After you’re back at the other side of the river, it would be a slightly longer trip to Petite France by cab or Gapyeong Tour Bus (approx. 20-30 mins).

Petite France is highly popularized by the recent hit K-drama “My Love from The Stars”, and “Running man”. This place is a small French themed culture village based on The Little Prince, and if you’ve followed our Instagram during our Korea trip blog, alot of those beautiful pictures of flowers etc come from there. It is a good place to enjoy and experience a variety of European performance and cultures. As the area is relatively small, you may cover the entire place in slightly less than 2 hours.

We were lucky to be there at an apt time, as there was a string puppet performance (Video above) at the Amphitheater shortly after we arrived. There are also other shows throughout the day depending on the time you are there. You may take a stroll around and appreciate the various antiquities, dolls and nature at its various exhibits. 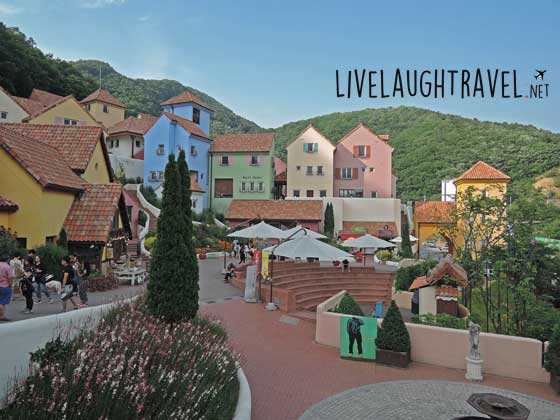 For those who got on the Gapyeong Tour Bus, cross over to the opposite side of the road and take the bus back to Gapyeong Station. Follow the “Timetable for Morning Calm Arboretum to Gapyeong Terminal”.

Do take note of the time as the last bus leaves Petite France at exactly 17:50 and would arrive at Gapyeong Station Terminal around 18:20. So when you are booking your return train ticket from Gapyeong to Cheongnyangni Station, do make sure you have sufficient time in-between while transiting. There is another route to travel back when you’re at Petite France. You may continue on the same route (same bus-stop where you alighted from) and get on the bus from Petite France to the next 2 stops ahead at “Cheongpyeong Station”. (As last bus leaves at 18:40, you will reach Cheongpyeong Station at 19:05). Follow the “Timetable for Gapyeong Terminal to Morning Calm Arboretum”.

And that would conclude your one day trip to Namiseom and Petite France!