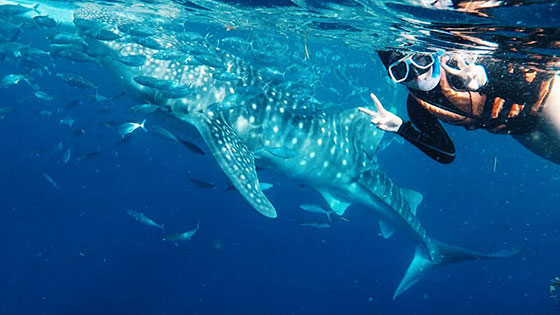 Big fishes are intimidating, we get that. More so when you know that it’s a “shark”. But one species that will blow you away with their gracefulness and gentle nature would be the Whale Shark.

They are absolutely huge fishes and they are the largest species of fish in the world. It is able to grow to a maximum length of 65 feet that rivals the size of large whales. Despite their size, they are harmless and very vulnerable fishes. It is a filter feeding species, where they feed on planktons or small fishes or squids by opening their mouths and pushing forward, or via suction feeding. The filter pads then separates the food from water in their mouth. 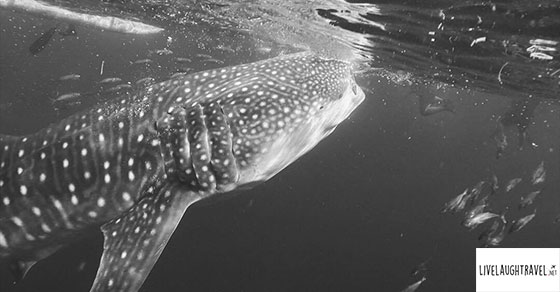 They are such gentle giants that they are safe to feed or swim among them. Whale shark swimming/viewing has become so popular that conservationists are actively trying to limit the exposure in order to protect the whale shark’s natural habitat and feeding regime.

The people behind this Singapore Food Blog & Travel Blog are actually huge animal lovers. And we can never miss a wonderful opportunity to see these huge creatures up close in person! We have previously made special trips to aquariums in Jeju and Osaka just to see these huge Whale sharks in captivity. So you can imagine our excitement when we heard we could literally swim with these gentle giants in their natural habitat during our recent trip to Cebu, Philippines.

Philippines is one of the few places in the world where you get to see whale sharks in the wild. They have guaranteed whale shark sightings in Oslob almost 365 days of the year, but of course it is subjected to weather conditions for your own safety.

We got recommended by a close local friend of ours to this reliable tour site that is able to bring people to swim with whale sharks and we jumped all over the opportunity. We booked through their site, they sent us a paypal invoice to pay the deposit, we did and we were set! (We do recommend you booking early as well as slots are pretty limited)


It is a long way from Cebu City to Oslob, so we had to wake up at 2.30am in the morning to start our 3 hours long journey to Oslob. Our driver picked us up from our hotel lobby and that was about all we remember as we both slept throughout most part of the journey. By the time we woke up, we’ve arrived in a small village restaurant in Oslob where we were served some local breakfast as part of the package. We spent our time gazing at the sunrise while waiting for our queue number to be called (for the protection of these wonderful creatures, they only allow a limited number of people at any one point of time).

But sooner or later, your number will be called where you would proceed to the briefing area before heading out to sea. During the briefing before you set out into the waters, you will be warned to NOT wear sunblock as it will harm the whale sharks. And unfortunately, you are only allowed to snorkel (for about 500pesos more, but we highly recommend it as it is rather pointless to just stay on the boat and see them from the top) and not allowed to dive or swim towards the whale sharks and touch them. But all in all, the closeness of such gentle giants being right in front of your eyes more than makes up for it.

After the briefing, we don on our life vest (optional to remove once you reach the site) squeezed onto a small paddle boat and off we go. I was actually surprised to know just how close to shore these giants are. Once there, we were given 15mins to snorkel around the boat and swim with the whale sharks. We are pretty limited to the area around the boat, but you have nothing to worry about because the whale sharks are so big that they are bound to swim by you regardless.

That short 15mins felt so much longer than it actually is. We were kept in constant amazement at how big these creatures are and how small we as humans are as compared to them. During our trip there, we saw as much as 3~4 different whale sharks and some came as close as less than 5ms away from us. I vividly remember  one particular part when i was looking at this whale shark from some distance, and when i look down into the deep blue, i realize his tail was just directly beneath me. Amazing, once in a lifetime experience that i wouldnt trade anything for.

In the tour package we opted for, aside from the whale sharks, it was also a half day tour that included a visit to a nearby waterfall and an island tour. So after gently washing up, we detoured to Tumalog falls before heading to Sumilon Island. 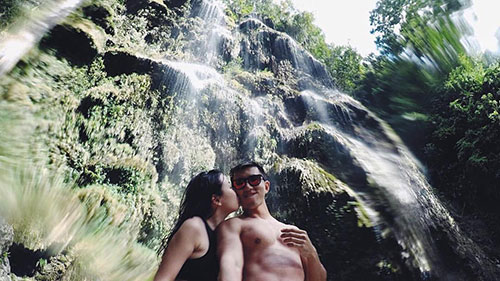 Tumalog falls is situated up the hills just 10 mins from the sea. Our driver drove us up most of the way and we had to switch to taking the local motorbikes for the final bit cause the roads was just too narrow and too steep for cars. Tumalog falls is not a very large waterfall but it was pretty nonetheless for photo ops! We spent about 15mins more at the area trying to take the perfect OOTD pictures before heading back for the next part of the tour. 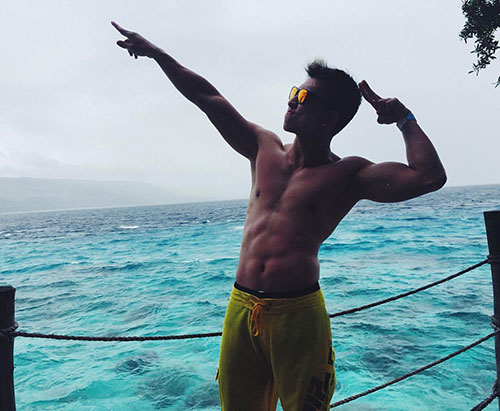 The Sumilon Island is a private island where you have to take a 10mins ferry in. They have activities for package holders like fishing, fish feeding, kayaking, and a trekking route. The tour comes with a buffet lunch but do take note that all outside food and drinks are prohibited and subjected to corkage fees!

While the falls was beautiful and the island was amazing. Nothing beats the short 15 mins experience we had with the whale sharks. It was the highlight of our whole tour if not our entire trip. The tour is relatively pricey, but we personally recommend everyone to give it a go. It’s a life changing and very humbling experience that we think everyone should do it at least once in their life.

Lastly, if you are intending to head to Cebu, here’s some resort recommendation that has beautiful private beaches (albeit being small), but have the ambience more than make up for it.

Check them out today!