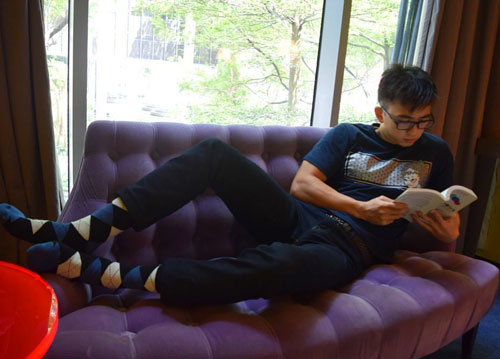 Traveling is more than just the act of actually getting from one country to another, its a feeling and mindset of being free and not tied down to the worries of the world. Cause as much as we love to travel, the truth is that for most of us who have full time jobs or are not yet financially free, we do not always have the luxury to jetset and just leave everything behind.

Our Singapore Travel Blog for one, recently got tied down by unforeseen circumstances and was forced to cancel the trips we had planned. So instead, we decided to opt for a staycation at a local hotel just to get away from everything without actually having to be away. We started scouting a few “recommended” staycation places and eventually decided on klapsons The Boutique Hotel after seeing waves of “influencers” post about them on social media.

klapsons The Boutique Hotel is a relatively new (since 2009) Luxury Boutique Hotel that have two outlets, one in Singapore and one in Bangkok. You can sense the difference the moment you step into hotel, how the hotel brands itself into a unique, quirky and artsy kind of young boutique hotel. 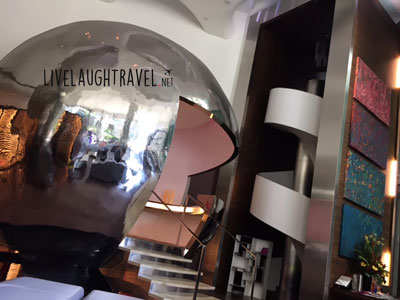 The concierge for one, isn’t behind a usual boring desk. It is instead on an elevated sphere like structure in the lobby that distinctly stands out and draws your eyes over the moment you enter the building.

Step inside the sphere and you’ll find one of klapson’s friendly staff members smiling and ready to serve you.  All was looking well so far as we took our keys and headed up to our room. 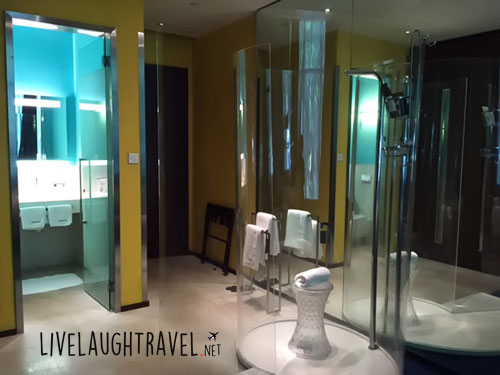 As you step inside the room,  you would immediately notice something peculiar, a strange transparent glass structure standing right in the middle of the room. Upon closer inspection, we realized this glass structure was in fact their shower. Strange, but all in line with klapson’s Boutique Hotel’s artsy vibe.

The room size was decent. A king size bed coupled with a velvet sofa by it’s side that overlooks the main road. I personally loved having some light in the room but for those who don’t, they have both motorized day and night curtains for the times you need your privacy. 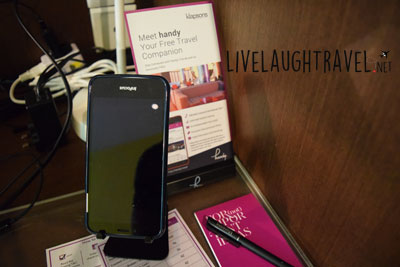 All was well so far. Nothing particularly fanciful worth mentioning but it was pretty decent for the price we paid. One of the things I liked about the room was that, like the M1 Hotel in Hong Kong we did a review on, klapson The Boutique Hotel also came with a smart phone that you can use to check for directions, maps, attractions etc and even make FREE local calls. A device that I think would be useful for foreigners visiting.

The only thing I didn’t quite like was the artsy glass shower that was in the middle of the room. While it all sounds sexy, quirky and appealing at first, it isn’t exactly the most practical once you actually want to take a bath.

The moment you take off your clothes, you could feel the slight chill down your spine; courtesy of the air conditioning in the room. This is immediately made worse the moment the first drop of water lands on your body and amplifies the chill 10 folds. What was designed to be (I supposed) a movie-like sexy hot steamy bath scene, was in reality more of a shivering experience. To again re-emphasize the fact that the shower was in the middle of the room, also meant that the steam from the shower itself resulted in the walls of our room being wet even hours after we took our bath. 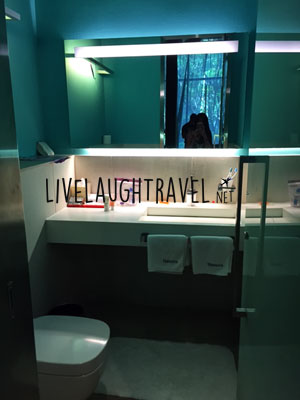 This is one of the things that I didn’t quite like as well, both klapson The Boutique Hotel’s rooftop bar, Fabrika, and their in house restaurant, the Hareloom (previously Sleeping Rhino), doesn’t open on weekends.

Ok I get that perhaps the bar’s target audience is the working class in the area hence the arrangement to only open on weekdays. But from a hotel guest perspective, it wasn’t exactly pleasant. First, I was kinda looking forward to the rooftop bar cause they seem to be advocating it quite abit and second, I had nothing to do at night.

For us it was fine cause we ended up just walking 13mins down the road to Tanjong Pagar area where there’s lotsa restaurants, cafes etc and even later to Anson road for their bar at night (all of which we would update at our Singapore Food Blog at a later time). But what I was thinking about was more of  travelers who are staying at the hotel and intend to start their day early/night.

I personally think that a hotel’s amenities are there for a reason. Like when we travel, certain times because we need to fit our schedule and plan our day according to our itinerary, we sometimes choose to eat at the hotel or stay in the hotel for the night due to convenience reasons. To not have that to fall back on in our travels seem rather odd, especially when it’s a hotel we are paying for and not a hostel/airbnb.

Their stated room price for their Executive room starts from $390+ (as shown on their concierge). But the good news is that with thanks to our partnership with Agoda, we were able to get the Executive room at just $210 which is relatively affordable for a staycation. Check your staycation dates through this search box for the cheapest deals by Livelaughtravel’s partnership with Agoda:

klapson The Boutique Hotel is located on 15 Hoe Chiang Road, in the heart of Singapore’s Central Business District. While that seemingly sounds like an ideal place, I would hardly call it a “place of interest” for our traveler friends visiting Singapore. There really isn’t much to do in the area and alot of the more touristy places are out of the way and traveling in/out of CBD is not just crowded, but also subject to additional cost such as ERP and what nots.

Well the good thing about klapson The Boutique Hotel is that it is relatively cheap and affordable for a decent hotel. But when I was there, I can’t help but wonder about the fact that because the shower is in the middle of the room, what would happen if you didn’t know about that beforehand and decided to stay there with someone you do not have a sexual relationship with (i.e your siblings, parents etc), cause again, the shower is a GLASS structure in the MIDDLE of the room. So unless you’re a couple (or if youre trying to get lucky by “unknowingly” booking klapson), things would be pretty awkward.

Aside from that, to give them a proper review, we feel that we have to look at klapson from 2 perspective and break it down from there.

-klapson The Boutique Hotel Review from a Traveler/visitor point of view:

If you are visiting Singapore, we personally wouldn’t recommend staying at klapsons. The hotel by itself isn’t the most strategically suited from a tourist stand point. There arent a lot of tourist attractions in the area and the nearest mrt is appx about a 15mins walk away. The lack of food within the hotel isn’t the most ideal for a tourist and accessibility would be an issue; having to travel in and out of the CBD etc. In essence, what klapson has to offer wouldn’t be what we personally would be looking for when we are traveling abroad.

-klapson The Boutique Hotel Review from a Staycation point of view:

If you are a local and looking for a place to do a staycation, klapson would then be a viable option. First off, it is one of the relatively more affordable staycation choices. The hotel is decent, artsy and a offers a fresh breather from your everyday life. The fact that it is located in the CBD would mean that you would probably even be able to head over after work. Also, unlike tourists who would be looking to make full use of their time in Singapore and visit touristy spots such as the Zoo or what nots, you can spend your time cafe hopping around Tanjong Pagar area or chilling at one of the bars at Anson during the night and just watch life go by.

With that said, klapson was a good one off experience, but when asked if we would come back again, we are honestly not too sure. klapson The Boutique Hotel while decent with good service, had nothing particularly spectacular that would make us want to keep coming back and paying that amount of money over and over again for that experience. For the similar price, we would be better off trying other staycation areas after staying at klapson one time.

We hope this has been useful and don’t forget to subscribe to our newsletter for more such reviews as we travel the world!