Universal Studios Singapore (USS) is Singapore’s biggest and only Theme park worth mentioning. It is the only Universal Franchise in the region with the next closest one being Universal Studio Japan in Osaka. The franchise have been known to make awesome well-rounded theme parks that are not only targeted at the adventure seeking (i.e Six Flag theme parks) but also always have something for the whole family with family rides and Characters such as Shrek, Minions etc appearing randomly along the park. It’s safe to say that any trip to Singapore would not be complete without a visit to Universal Studios Singapore (USS).

But unfortunately, if you take into account the ride queues that can go over an hour and having to stop for parade, food etc, chances are that you won’t be able to cover all the rides in the park in one day especially if you do not intend to purchase the fast pass.

So here’s the top 6 Universal Studios Singapore ride based on our Singapore Travel Blog experience.

Battlestar Galactica tells of a story of the Humans (Red track) vs the Cyclon (Blue Track) [Note that it’s actually 2 coasters and you would have to queue twice separately]. It was designed in a way such that both coasters would go out at the same time as both coasters battle in the twist and turns of an intertwined track. The proximity to another coaster at that speed and that high in the air adds on to the whole excitement.

Battlestar Galactica has undergone quite a few changes over the years but still remain the anchor ride of the whole theme park, so do expect to queue up to 3 hours just for one of these coasters. While both of which is worth trying, if you only have time for one, we personally much preferred the Cylon (blue) track where the dangling feet system coupled with the loops makes it a so much fun-ner ride. If you are looking for a bit more of a rush, remove your shoes and socks as you feel the wind run through your toes. 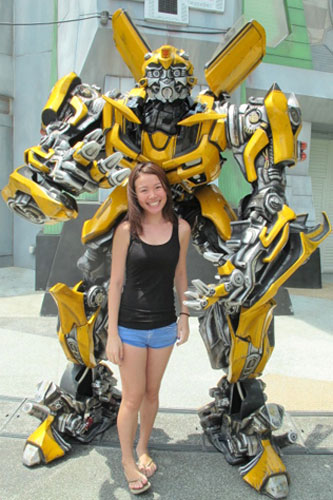 (Note that this picture is not the ride as we are not allowed to bring cameras in, but is in fact a mascot located right opposite the Transformer ride)

The transformer ride is not a coaster, but is instead a 4-D experience that is suitable for both the young and old. It takes you through a 4-D experience as you sit in the Machine of an Autobot (EVAC) and aid in the battle as you watch Optimus Prime and Megatron fight for the all spark. The ride by itself is not scary at all and is instead just a very unique experience that EVERYONE should try at least once. For those that have been to Universal Studios Japan, it is the same concept as the Spiderman ride over there, but that’s another story for another time.

3. Revenge of The Mummy 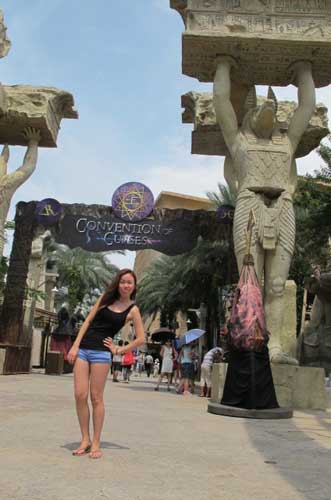 (Note that this picture is not the ride as we are not allowed to bring cameras in, but is in fact entrance right before the Mummy ride)

Revenge of the Mummy is an indoor coaster with drops and high speed turns. There are no 360 degree flips in the coaster so it’s more of a fun coaster than it is a scary one. The mummy is also a highly popular ride and queues can go up to 2hours or more. 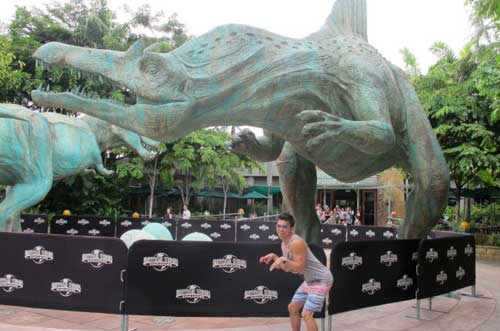 (Note that this picture is not the ride as we are not allowed to bring cameras in, but is in fact a statue right opposite the Jurassic Park Rapid Adventure)

Ok to understand the excitment of this ride, you first have to understand that we NEVER EVER take rides in theme park that involves getting wet. But the Jurassic Park Rapid Adventure is unlike usual wet rides in other theme park where you just sit on a log and slide down a drop splashing water onto yourself rather pointlessly. Jurassic Park Rapid Adventure takes you through a water ride around Jurassic Park with a short story behind it. There are areas where there are slight drops but depending on where you’re sitting, you may or may not get wet (the ride is in fact a bumper boat that spins based on the current so there’s actually no best seat to stay dry). You will see dinosaurs, T-rex along the way and yes if you have a raincoat, i suggest you bring that along. They do sell raincoats on the spot but they cost around SG$10 or so, so consider yourself lucky that you are reading our Travel Blog and bring your own 🙂 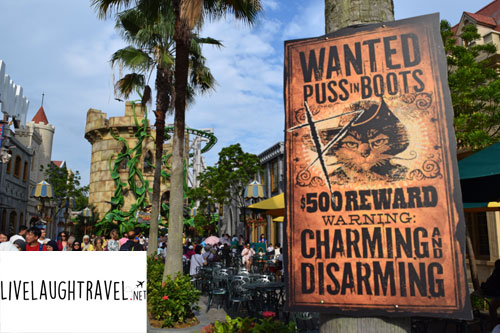 Puss in boots is one of the latest addition to Universal Studios Singapore, opening only sometime last year. It was designed as a kiddy ride but is surprisingly fun even for adults. A MUST if you are visiting with a family. There’s no crazy drops or 360 degree flips, but the experience was different and well, fun. 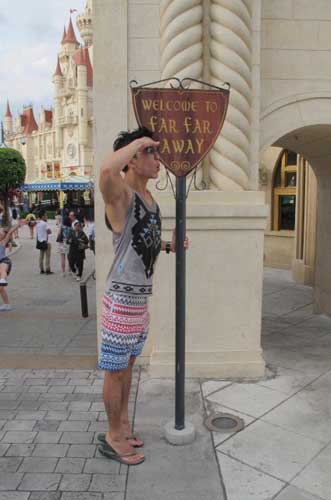 (Note that this picture is not the ride as we are not allowed to bring cameras in, but is in fact the entrance to Far away land where the Shrek ride is located)

We were contemplating whether to add Shrek to the list as technically Shrek isnt a ride, it is more of a cinema experience with 4D effects. It is a much milder version of the Transformer ride but still deserve a honorable mention and would be suitable for families, kids, elderly etc

How to get to Universal Studios Singapore 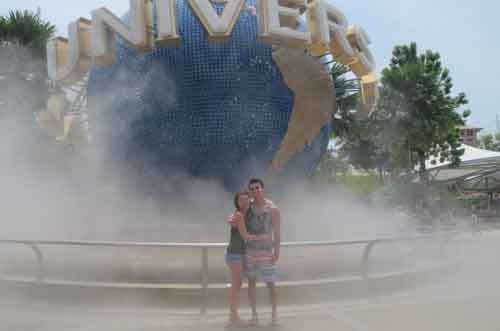 Universal Studios Singapore opens from 10 am but closing time varies between 6pm~9pm depending on the season and weather. It’s best to check with the staff on the day of your visit. We recommend heading there as early as possible so you would able to maximize your ticket!

It is also worth mentioning that the Monorail leaving Sentosa ends at 12midnight.

One of the things we dislike about USS is that unlike Disneyland which generally offer it for free (Read 8 secrets to conquer Tokyo Disneyland), USS has an add-on ticket system where you have to of pay an additional fee ON TOP of your base ticket price to enjoy their Fast pass service.

We find it in fact a total rip off considering how the express pass is almost 80% of the base ticket price. In our own humble opinion, we however do not feel a need to purchase the express pass tickets. Whilst express tickets do get you on the ride faster, USS is a relatively small theme park and aside from the above mentioned 6 rides, we personally find spending the rest of our time in USS taking pictures with characters etc much more fulfilling and express pass do not work for Phototaking with characters. 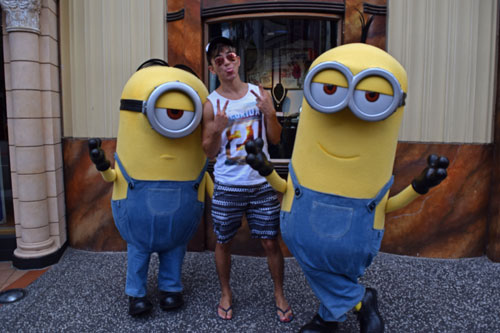 I have not a single doubt in my mind that every visitor visiting Singapore should head to Universal Studios Singapore, it was one of the few places in Singapore that’s actually fun and caters to the whole family.

The Universal Studios Franchise did not fail on maintaining their high standards when they opened their latest Franchise in Singapore. USS ensures that park visitors get not just the excitement of the rides, but the experience of stepping into a whole new made up universe where sesame street characters roam the streets and shop fronts/buildings represents what we used to see in Cartoon and TVs.

The only downside we feel is how USS blatantly and openly tries to squeeze as much money as possible from each visitor, which can be a pretty turn off and ruins the whole experience. Expensive food and drinks aside cause that’s common among other theme parks as well, but things like adding on for Express pass and having to pay for locker to store our belongings (we paid close to SG$20 just cause they didn’t allow us to have any belongings with us when you board the Battlestar Galactica and the queue was close to 3 hours) is very much a damper.

But if budget isn’t an issue for you, then USS is the place to be for both visitors and locals alike. In fact, we have personally went to Universal Studios Singapore more than once and we are very sure we are not the only one.

We hope our Travel blog review on Universal Studios Singapore has been helpful!

Do not forget to share this with your friends and family so they don’t waste their time queuing on all the wrong rides!