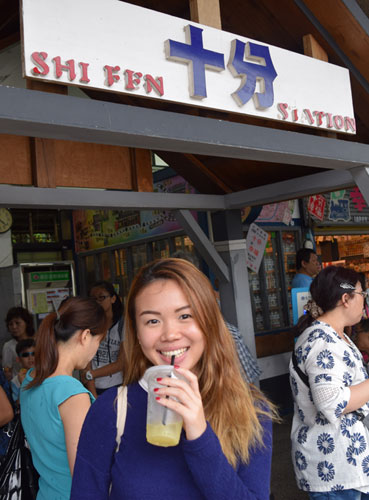 Taiwan is home to some of the friendliest people in Asia.  It is a country with a balanced mix of rich culture with places housing architectures from as old as the Tang dynasty, to technologically advanced systems. And with budget carriers such as Scoot, Tiger, Airasia, Jetstar (the list goes on) etc all flying to Taiwan, visiting Taipei has never been easier or cheaper!

So we were no exception and our Singapore Travel Blog visited Taipei sometime last year and spent a short but satisfying 3 days there as a weekend getaway. We’ll share with you all about our non-stop shopping and eating Taipei Itinerary!

We jetted off in a midnight flight and touched down at dawn and were welcomed by a lovely sunrise landscape.

First stop was checking into our hotel, which was right smack in the heart of Xi Men Ding, and just less than a minute from the public rail transport! 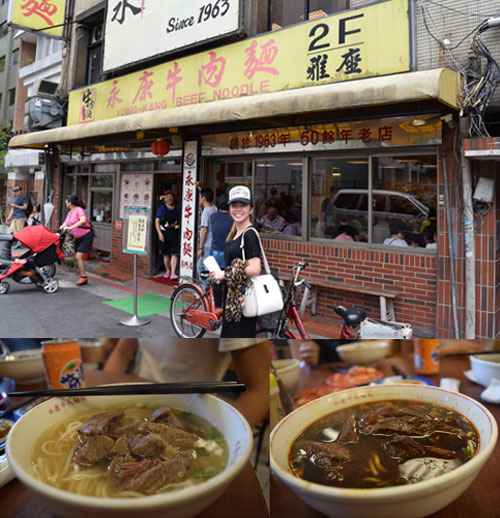 After a quick shut eye, we headed down to Yong Kang Street for some, dubbed the “best beef noodles in Taipei” to satisfy our hungry stomachs. So I’m more of a soup noodle person so I went for the beef noodle soup. Less than 3 mins or so and a bowl of pippin’ hot clear soup with rice noodles and tender soft beef slices was served *yums*. As Alvin preferred spicy flavored ones so he opted for the Braised Beef Noodle, which was a tad spicy (for me).  The meal was very affordable for the amount of meat served in the bowl. 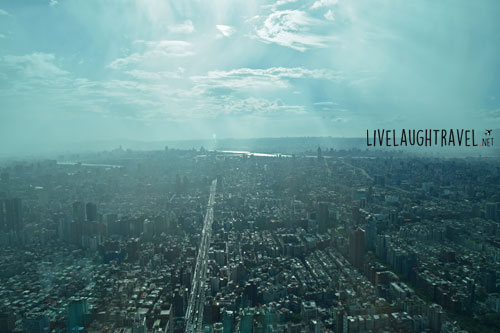 After which, we made our way to the famous Taipei 101, and scoot up the Guinness World Record for fastest elevator, and landed ourselves on the observatory deck (level 89) of Taipei 101! Unfortunately, it was the typhoon season so the outdoor decks on the 91st floor was closed. Then again, I caught a double rainbow, which lasted for a good 10 minutes!

Then we took the lift all the way down and made it to level 1 in less than 40 seconds and hurried to the World Famous Award Winning, Michelin star restaurant, Din Tai Fung found at the bottom of 101! So if you don’t already know, Din Tai Fung originated in Taiwan, and they are famous for its Xiao Long Bao (Chinese Soup Dumplings). It’s probably one of the cheapest Michelin Star food you can find anywhere in the world. So even if you are not having it at Taipei 101, you can always try them across all their outlets found throughout Taipei.

Then its back to all the shopping and walking around Xi Men Ding where you can shop from both international and local brands. Xi Men Ding is one of the younger districts and one of the most popular shopping places in Taipei.

And if you thought we’ll be too tired to walk anymore or too stuffed to eat, man we’ll prove you wrong! No trip to Taipei is complete without a visit to a night market! So after all the shopping in Xi Men Ding, it was over to the famous Shi Lin Night Market! 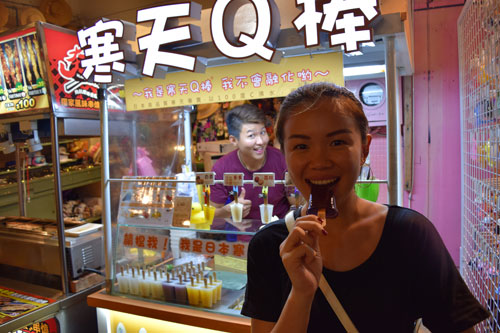 This place has every Taiwan street snack available and its non-stop snacking from the start of the market all the way to the end. And it opens till late for all you late night supper goers.

We tried all sorts of desserts, I lost count! The memorable ones were black ball, hot and cold green bean soups, shredded milk ice dessert, and Alvin’s favorite would be the fried milk cubes!

We walked till the streets started packing up for the day and slowly made our way back to rest for the night. 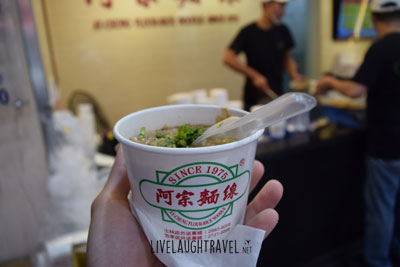 We got up early and made our way downstairs to have the famous Ah Chung Mian Xian found along Xi Men Ding! Just be prepared to queue or stand along the streets to have your noodle breakfast with a spoon! But man that was my favorite! It was well seasoned and the flour rice noodle isn’t over cooked and doesn’t break easily. Definitely not too heavy a breakfast but absolutely satisfying and affordable.

Then we got a little more adventurous for day 2 so we decided to make a trip out to Jiu fen and Shi fen. Jiu fen is located atop a mountain, in New Taipei City, Ruifang District. Getting to Jiu fen was a long journey but the trusty convenient bus service brought us directly to the start of Jiufen old street.

To get to Jiu Fen, we headed to Zhong Xiao Fu Xing Station, which was a couple of stops away from Xi Men where we were staying, and board Bus #1062. Itll be a long journey up the mountains but the sceneries will make up for it.

Alternatively if you wish to travel there via train, get to Taipei Main Station and board the train towards Rui Fang Station, and follow directions to the bus –stop and board the bus towards Kee Lung (headed for Jiu fen).

Jiu fen rose to fame during the Japanese occupation, when the villagers in the area discovered gold in one of the mines. This caused a gold rush and fast forward to today, the gold mine has been preserved and turned into a museum attraction. So 365 days a year, there are hoards of locals and tourists alike visiting Jiu fen for its glorious food and tea selection. But even if you do not plan to visit the museum, the streets of Jiu fen is still well worth a visit to immerse yourself in the hustle and bustle of the local culture and local food.

As we walked into the bustling food street, we settled in the first shop on the left for some “ah ma” fish paste soup. It is a bowl of tasty clear hot soup filled with fish paste that is handmade into various shapes and sizes. The glass noodles were delicious and worth a try to! 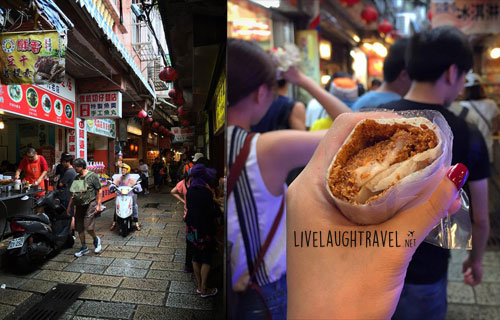 Walking down the street was an endless selection of food. When the weather gets too hot, worry not. Stop by for some shaved peanut ice cream wrapped in popiah skin. Its deceptively understated and we went back for seconds! For a more local taste, they would add in coriander for a finishing to enhance the taste of the ice-cream.

There were also stalls and stalls of souvenirs, snacks and tea shops. But since we only planned for a day trip and we we were slightly pressed for time, we didnt visit the museum and hopped onto a cab and made our way to Shi fen.

If you Google Shi fen, tons and tons of images of railway tracks and sky lantern would appear. Sky Lantern, also known as “Kong Ming Lantern”, was named after the famed military strategist “Zhu Ge Liang” from the period of the three dynasties. Every day, tons of tourists travel to Shi fen and write their wishes onto these sky lanterns, and lit up the carbon fuel at the bottom to send it up into the skies like a hot air balloon as a message to the gods. 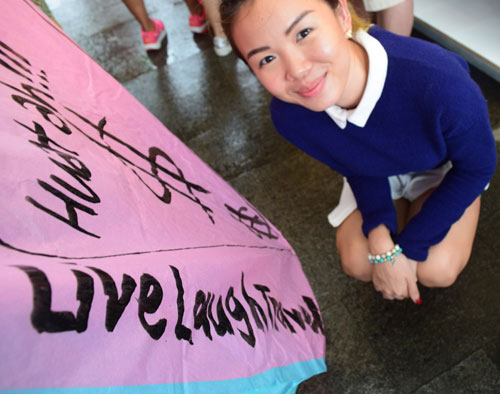 There, you can see a variety of different colored lanterns, symbolizing different things. You can purchase a lantern and start writing all your “get rich, stay healthy, hoping for love” wishes on 4 sides of the lantern (if you are traveling with friends, you guys can split the sides and share the cost of one lantern) with a traditional chinese brush and the store owner would kindly take photos of you with your sky lantern. The store owner would also then help you lit it up for it to fly up into the skies and to the mountains! But do be careful of the oncoming trains as the tracks are fully functional and trains pass by every 25-30 minutes, albeit rather slowly. 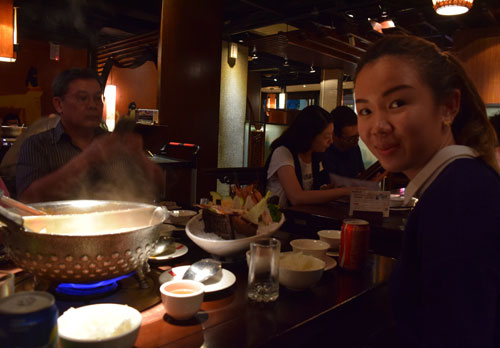 To end off our fruitful day, we visited a mala hotpot place called “Ding Wang”, recommended by a friend, and apparently was pretty famous in Taiwan according to our cab driver. During its peak when they first started out, reservation wait list was up to a few weeks!

The food selection and soup base was relatively similar to Hai Di Lao, but sadly it was pretty underwhelming for the hefty price tag, and the lack of quality service didn’t add any bonus points to the place 🙁 However, if you do decide do give either Hai Di Lao or Ding Wang a try, you MUST make reservations at least a few days before or else you’ll be looking at waiting for hours just to get in. 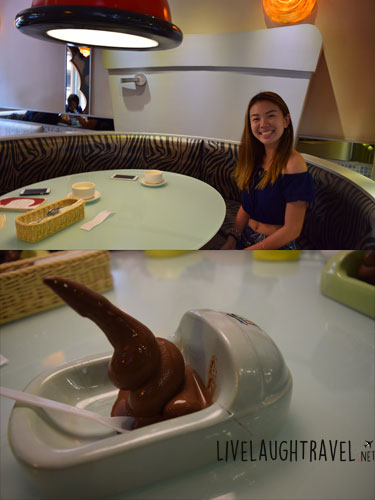 So on the last day, we walked over couple of streets from Xi Men Ding to Modern Toilet Café, which is a very popular theme restaurant in Taiwan Xi Men. The concept comes from it’s name, the “toilet” and everything you see/do in the restaurant revolves around that! For example, your seats are toilet bowl and your food is served in things you can find in a lavatory. Notice how the backdrop of our seat is a flush and the light above us is made to look like a Toilet Pump, the picture below that is of a chocolate ice-cream served to look like poop in a squatting towelbowl like bowl. Heads up thou don’t pin too high hopes on the food, but the concept we thought was rather interesting. 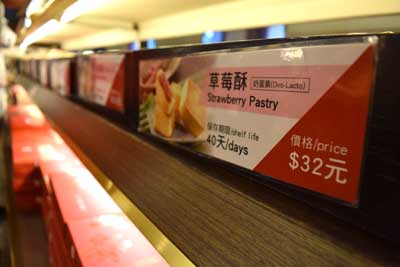 We chilled around for a bit and did some last minute shopping around Xi Men, and searched for the “Best Pineapple Tarts in Taiwan”.

Chiate bakery, undoubtedly serves the best pineapple tarts ive ever tasted. (Approved by my foodie Daddy and friends). And it deserves a post entirely on its own! Read here: BEST PINEAPPLE TARTS IN TAIWAN

Just look at how much we bought as testimony to how good it is: 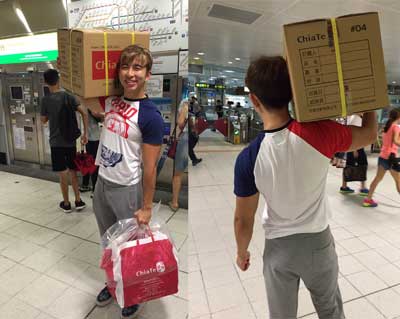 So we grabbed as much as we could which did not last me for 2 weeks unfortunately, but the friendly and helpful employees did a good job in packaging everything for us to help us ( just Alvin actually) bring all that stash back!

And so, we slowly made our way back to the hotel and up the cab, and journeyed to the airport and back home to sunny Singapore.

We hope our travel blog‘s itinerary has been useful and feel free to ask us anything in the comments blow and we’ll try our best to answer you if we know.

So the next time you are looking for a short weekend getaway, know that Taipei is one of the options you can consider! I mean, just look at how much we accomplished in just a mere 3 days!

We’ll be looking at returning to Taiwan sometime so till next time!