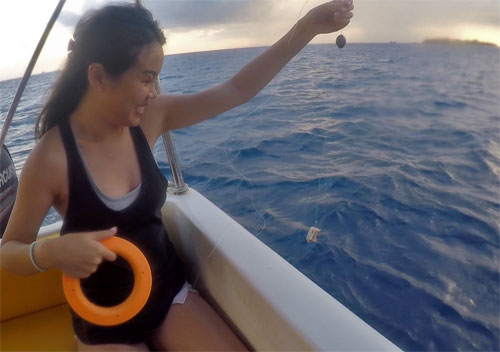 As most of you already know, our Singapore Travel Blog recently took a trip to Maldives to celebrate Valentines Day!

For one of the nights, we decided to go on a Maldives night fishing package, where they would take us out to sea in the evening and we’ll get to fish for dinner!

But thank god we had our Boat driver who was also there fishing with us as neither of our hooks were catching anything. So as we just sat there on the boat, staring into the pitch black darkness while the boat driver seems to be catching an endless amount of fish every 5 mins, things were looking abit boring and uneventful.

But all of a sudden, Nicole‘s line felt a strong tug, initially she thought she had like two other times before that, caught on one of our lines again. But as I took over the reel from her, trying to help her untangle the lines, something felt amiss as the line didn’t seem to be pulled around the boat, but instead, out towards the sea. I started to reel it in manually and soon realized there was something at the end of it! “FISH”, I screamed as i tried to pull the line in as fast as i could. The tug was strong and I knew it was gonna be something big.

As the line grew shorter and the hook broke the surface, there out of the pitch black darkness emerged a baby shark at the end of the hook! “IT’S A SHARK!”, we screamed. Our boat captain who was just a few feet away, squinted his eyes before breaking out in a small grin and said “yes, shark!”. He walked over and took the line from me knowing i did not know what to do with the mini shark that was now onboard our boat that was no bigger than a hotel’s bathroom.

He quickly cut the line and released the shark from it’s hook before safely returning the shark back to the sea. We would like to clarify that it is illegal in Maldives to eat sharks and we are not for cruelty to sharks. We had no control over what lands up at the end of our line and we ask for everyone to not kill wildlife. We are animal lovers, and to us, it was just an amazing story that we would be able to tell our friends, family and readers, how 2 idiots who have no experienced in fishing managed to catch a shark in Maldives!

As for the rest of the fishes (Alvin caught one), we had it cooked back at the hotel and shared it with the staff so it wasn’t like we were fishing for sport or anything 🙂