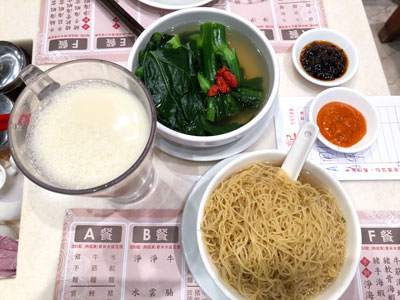 If anything, Wanton Noodles (also known as Wanton Mee) has got to be the unofficial official dish of Hong Kong. One simply can’t head to Hong Kong without having these famous noodles served with their delicious broth. But then that also raises the question, with so many wanton mee shops in hong kong and every roadside store selling them, which is the one that’s worth the time/effort to visit? And lucky for our Singapore Food Blog team, we managed to chance upon Chee Kei Wanton Noodles during our recent trip to Hong Kong. 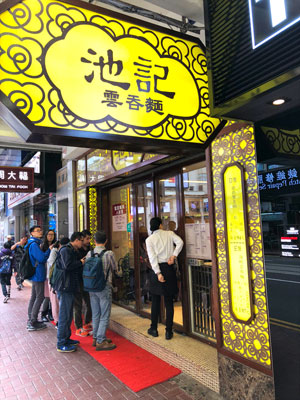 The truth is, we were never meant to head to Chee Kei (池記), in fact, we didnt even know about them prior to our visit. We were just two hungry souls roaming the streets of Hong Kong on New Year’s Day desperately looking for something to fill our starving tummies. We chanced upon their outlet at Causeway Bay and saw a long snaking queue waiting to go in. Being the typical Singaporeans we are, we naturally assumed that it was gonna be good and our travel blogging instincts kicked in, telling us that we had to try it.

I was pleasantly surprised that despite the queue, the turnover was relatively fast and it only took us about 15~20 mins to be seated. The restaurant itself was slightly cramp and just trying to maneuver to our seats without knocking into anybody with my big bag proved to be abit of a challenge. Thankfully though, the air conditioning helped to make the place feel not so stuffy and they had an English Menu we could browse through. Staff members were also friendly and patient, which can be a rare attribute compared to many other food chains around Hong Kong. 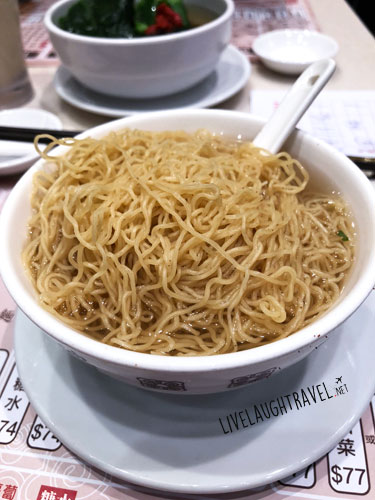 There really isn’t much of an option to choose from actually. They served their Noodles in the same broth but you have the option of choosing whether you want it served with Wanton or Dumplings. We of course, went for the wanton option.

The aroma of the broth hits your nose almost instantly when the noodles are served. The noodles were soft yet spongy. The thinness of the noodles meant that it could absorb the taste of the broth and it complimented each other perfect. The broth was strong and had a tinge of pepper which just increases your appetite with every mouth.

Within the Wanton itself is a generous portion of crunchy prawns that you can literally hear as you bite down on them. We also loved that they were not stingy with the number of wantons they served and the ratio of noodles to wanton meant that you could have a mouth of wanton with every other mouth of noodles. 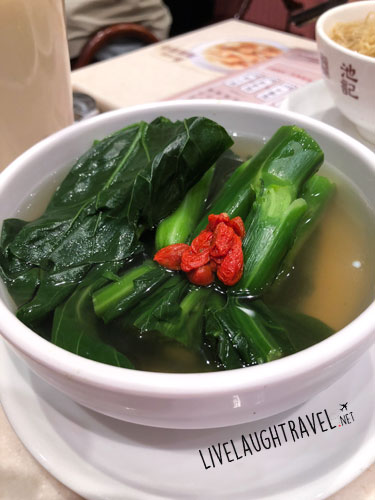 For a small fee, you too would be able to “complete your meal” by adding on their Kai lan Vegetable (Chinese Kale) which is served in their herbal soup. In my opinion, the herbal soup by itself is worthy to be served as a dish on it’s own even if you are not a fan of vegetables. But perhaps the peppery base of the wanton soup overpowered this light based herbal soup and the vegetables while nice, werent particularly worth mentioning. 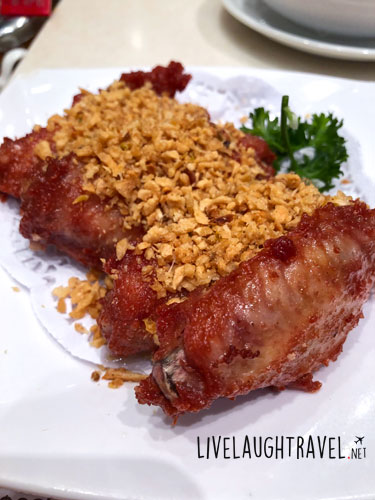 Chee Kei’s Chicken Wings are easily the star of the place in our opinion, and yes, even more so than their wanton noodles itself. Again, we didnt have any intention of ordering their chicken wings when we entered and merely wanted to try their wanton mee. But as how some of the best things in life are unintended, so was their chicken wings.

As we sat down on our table, we realised how almost every single table around us was ordering them and we couldnt resist but to order one for ourselves too. The wings were fragant and despite the fried surface, the meat was cooked perfectly to ensure that it was still juicy on the inside. The chicken itself was also fresh and the meat would easily come off the bone without much effort. The fried garlic that was served with it added that bit of crunchiness to the dish and also helped in the overall fragrance of the wings. It is hence safe to say that we licked down their wings down to the very bone.

Other notable mentions of the place include it’s chilli. If you are a fan of spice, you have to add it to both your noodles, your wanton and also the Kai Lan vegetables. It was the kind of spicy that while stingy, leaves you wanting more.

Another notable mention is it’s Crab Porridge which Chee Kei is also famous for. Many of the other tables around us also ordered the Crab Porridge when we were there. But sadly for us, our limited stomach space after the wanton mee meant that we didnt had the luxury to try it for ourselves. If you have, let us know in the comments below how was their Crab Porridge.

When we think of Wanton Mee in Hong Kong, most of us naturally think/recommend Mak Noodle’s which our Singapore Travel Blog, have too recommended in our 1 Street, 7 Must Visit Restaurant article in the past. However, with the influx of visitors to Mak’s, we have personally felt that their standards have dropped and it isnt as tasty as it was before. Chee Kei offers this alternative to have premium delicious wanton noodles that are tasty yet inexpensive.

They currently have 6 outlets which includes one at the Airport itself, so you can try them as you are waiting for your flight/be the first meal you have upon arriving. Alternatively, they are also on Deliveroo and you can have them ordered and sent directly to your Hotel/Airbnb Room.