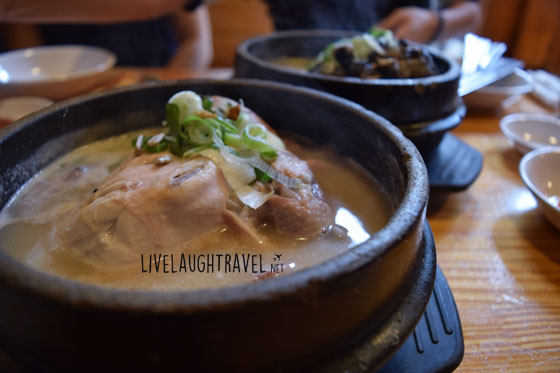 If you would just Google and search for Korean Ginseng Chicken Soup, you most definitely will see “Tosokchon” on your search result, and accompanying it, raving reviews on them, praising them for serving one of, if not the best Korean Ginseng Chicken in Seoul.  You may be surprised to know that they are featured on Korea Tourism Organization as a recommended place as well.

Korean Ginseng Chicken Soup, also known as Samgyetang, is a very popular Korean Dish. It is essentially a whole chicken that is stuffed with spices, herbs, ginseng, glutinous rice etc and slow boiled to perfection. The dish is traditionally served to guests on a pippin’ hot claypot.

So after reading all about it on the net, our Singapore Food Blog decided to make a trip down to Tosokchon on our recent trip to Seoul. It wasn’t inaccessible, and we had no problems finding our way there. We visited around 2pm local time and boy were we glad that there wasn’t a long queue for lunch.

The layout and exterior of Tosokchon was interesting to say the least. The restaurant is operating in a Hanok (Korean traditional house) and the interior of the restaurant looks exactly like what you would see in a Traditional Korean drama. The look and atmosphere is complete with dining rooms furnished with low tables, straw floorings, cushioned mats and wooden sliding doors. Guests dining in are required to remove their footwear before entering the dining area before finding themselves a comfortable seat on one of the mats.

As with most Korean restaurants, there is free flow of Kimchi and pickled radish to complement your meal. The service was swift and we did not have to wait very long for lunch to be served.

The portions of the dishes were pretty generous. One serving was enough for 2 persons in my opinion. First, we tried the original Samgyetang. The soup color of the soup was milky, and it was thick, rich, smooth and full of flavor. You can taste from the first spoonful that they definitely did not shortchange you on the ingredients and have even included the whole ginseng in the dish. The taste of the ginseng was strong yet not overpowering. It was a good balance and I personally enjoyed every bit of it. And just FYI, I do not usually enjoy the smell/taste of ginseng. 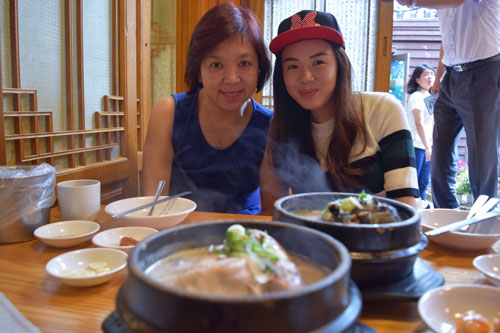 I dived my chopsticks into the chicken and the meat was so soft and tender, it fell apart effortlessly. The recommended way of enjoying Samgyetang was to dip the meat into salt and pepper, but its up to individual taste preference if you’d like to pair it with the said seasoning for extra taste.

The Korean Ginseng (Black) Chicken Soup was just as good as the original but with its flavors amplified. I personally enjoyed the black chicken more. I personally didnt require any extra seasoning as I devoured my pot of black chicken soup. We finished every last bit of the meat, glutinous rice and soup.

From our Travel Blog‘s experience in Tosokchon, it is most definitely a must try when you are visiting Seoul. It genuinely is one of the best Samgyetang I’ve had the pleasure of tasting. Plus, it is easily accessible via public transport, and the best part, the meal DOES NOT cost a bomb. In fact, it is pretty affordable considering its authentic and how it is traditionally prepared with full and rich ingredients. So, do give it a try!

Tosokchon accommodates 420 pax per seating, and operates through the year from 10am to 10pm.

Directions to Tosokchon via Subway.

Alight at Gyeongbokgung Station on the Seoul Subway Line 3.

Exit the station via Exit 2, and proceed straight and turn left when you see Jahamun-ro 5-gil Road. Tosokchon will be situated on your left.

It is very conveniently located and you can plan to visit the gyeongbokgung palace or bukchon hanok village before or after your trip to Tosokchon.