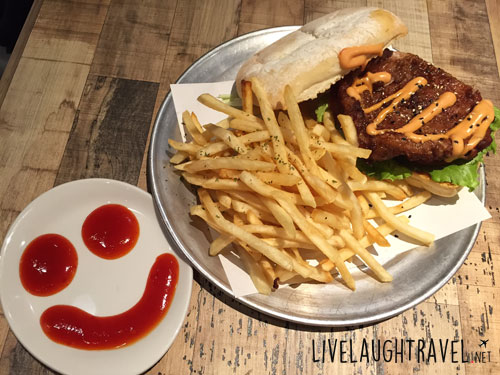 Three little pigs; most of us recognize this as a childhood story, but not many of us know it actually exists! This little restaurant in Singapore named “Three Little Pigs” with exterior glass layout and a short yet fancy menu caught our eye when we were rushing past the basement of Ngee Ann City one evening.

So some time later our Singapore Food Blog decided to make a reservation to try out their menu. For a restaurant set up in the prime shopping area of Orchard, Ngee Ann City, the price tags on the menu definitely were reasonable and relatively pocket friendly! You can expect main course to be below S$18, and their starters are priced from S$4.80 – S$7.80 (tell me if you find another restaurant in Ngee Ann City with such a price range!)

So the name of the store intuitively tells you that they sell pork, and A LOT OF IT. The menu was basically all about pork and they featured a signature pork chop prepared with fresh new flavors unlike the ones you would see at the western stalls at the hawker centre.

We were a table of 4, so we ordered 4 sets of their signature pork chop, prepared in 4 different ways, and a starter to share amongst ourselves. 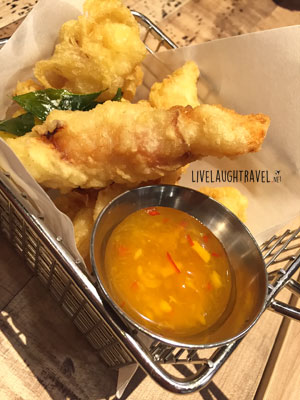 The clever way of mimicking Japanese bacon wrapped asparagus; the people at three little pigs served fish fritters with the all time favorites bacon strips was genius (alright, I’m an avid bacon lover). The bacon did not overpower the fish and it wasn’t as oily as we expect. The mango chilli relish was a great twist to the dish. The spicy and sweet yet tangy flavor from the mango gave it a good Asian kick.

This is as normal as it gets for a plate of pork chop. Served with rice, a runny sunny side up egg with a small twist and a touch of goma Japanese leek. It was normal yet somehow new, pairing the pork chop with the goma sauce was ingenious. It didn’t exactly blow us away, but it was worth a try. 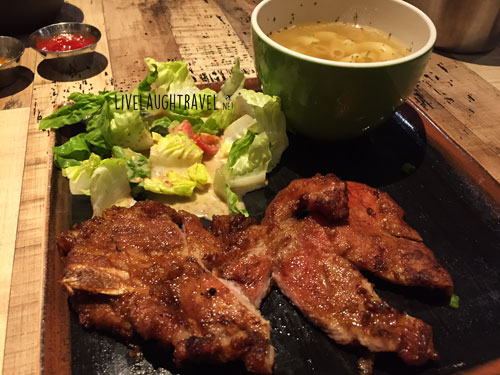 Likewise, it was a slab of pork chop with a bowl of macaroni soup served on the side, with fresh vegetables. It is somewhat similar to the one served with rice just a different form of carb to top the dish. That aside, a plus point for this dish in my humble opinion, was that the macaroni soup was rather tasty. 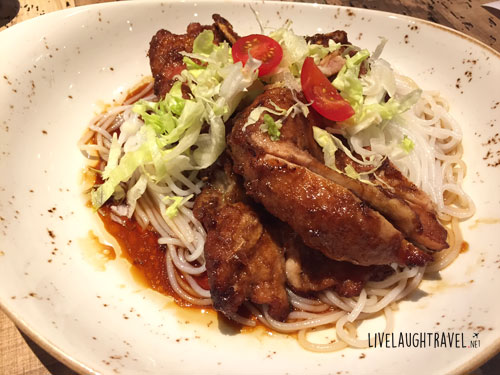 This was my favorite dish of the lot that we ordered in that one seating. The pork chop was sitting on top of noodles in gravy with fresh cut lettuce and garnished with fresh cut cherry tomatoes. What blew me away wasn’t the pork but the choice of carb was thick beehoon; which we as Singaporeans often would eat it with fish noodle soup or laksa, served by local food stalls. It looks very simple, but I thought was the most interesting and it genuinely was very tasty. The gravy complemented the juicy fried pork chop well, and it felt like I was having a hot bowl of Chinese noodle soup, in a western restaurant.

Picture a pork burger, and that’s about it. Essentially, it’s a pork burger except it is served with a Ciabatta instead of a regular sesame burger. Topped off in classic western fashion, lettuce, tomatoes, crispy French fries and thousand-island sauce.

The pork chop for all the dishes were consistent. They were tender and juicy, and comes with a slight salty crunch on the outside. The servings were pretty generous considering the price we are paying for it.

All in all, I would say the atmosphere was nice and it’s a pretty nice place to chill with your colleagues and friends for a night out and catch up.

Don’t forget to subscribe to our Travel Blog for more of such food and travel tips!