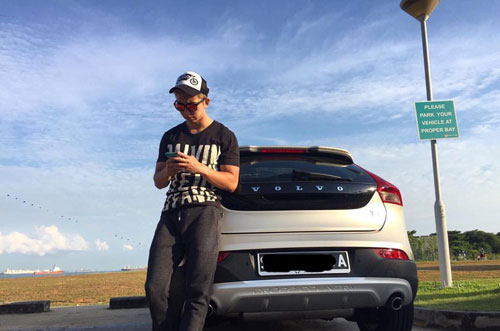 We do get quite abit of sponsorship request but recently our Singapore Food Blog and Travel Blog got one we have never gotten before. One that we were more than willing to jump all over on, A CAR SPONSORSHIP!

Volvo Singapore recently reached out to us and offered to Sponsor us their 1.9Litre Volvo V40 Cross-Country for a weekend to allow us to test drive the car.  The V40 is in fact Volvo’s top selling model in Europe and 2nd most popular of it’s entire Volvo range on a global stage, so we were obviously excited about giving the V40 a go.

When we first knew that we were getting the car, we figured to ourselves what better way to test the car then to do a road trip around Singapore. (Read about our Singapore Food Hunt Trip)

We are no car experts, but after 3 long days of driving and restaurant hunting, these are our unbiased thoughts:

When you think of Soccer mums, you think Volvo. That memory has somehow over time etched itself in our minds thanks to the countless Hollywood videos and commercials. But over the past decade or so, Volvo as a company has worked extremely hard to rebrand itself (or so we like to think) and it’s cars.

Volvo cars today are no longer that boxy HDB on wheels. Volvo cars have come an incredibly long way in the aesthetics department.

The Volvo V40 in particular, is a sports hatchback. One of the things I really love about the V40 is it’s view from the rear. I love the streamline lights and just the entire outlook of it’s trunk. It’s clean, classy, young and also very futuristic at the same time. 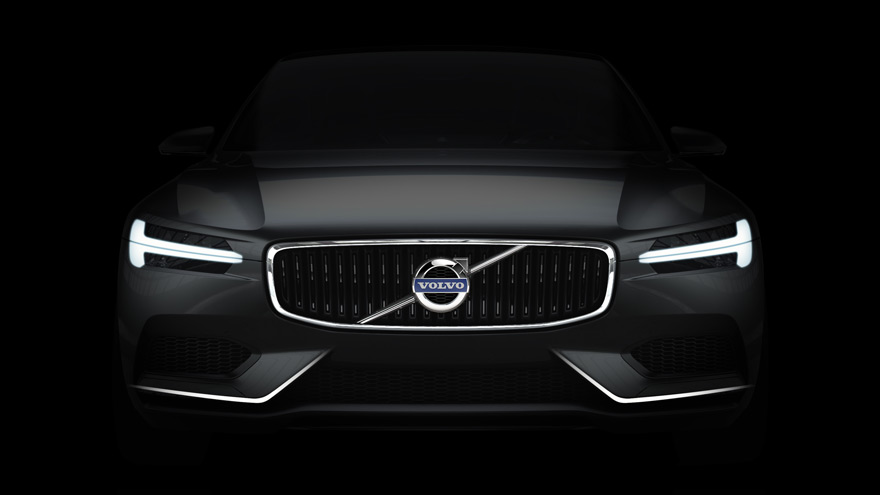 Another personal favorite are it’s “Thor’s Hammer” T shaped LED Lights. If you look closely, the V40’s Front lines are in fact in a shape of a Hammer. Just how awesome is that?

But even though Volvo as a company has came a long way, that’s roughly where my love for the V40’s aesthetics end.  The V40 really stepped itself on the foot by giving it such a nice “backside” but the front was a tad too long, making the proportion look slightly weird and rather old.

The color of the car we were given, Luminous Sand (it looks like an extremely light bronze) didn’t help in making the car look young either. The good news however, is that the car comes in 7 other colors (8 in total) and the Denim Blue in particular looks extremely sexy and is our personal favorite. 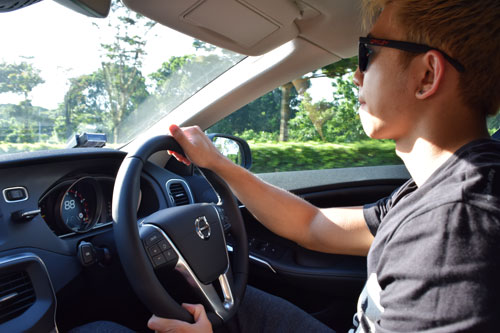 Like most other cars these days, the Volvo V40 Cross Country can fit 5 people, but 4 comfortably. It comes with losta detail on their award winning upholstery and all that, but truth be told, to an untrained eye, it’s just a seat. The seats are comfortable albeit the fact that the ceiling is rather low (like all sports hatched backs are) and that’s really all you need to know.

One of the biggest benefits of choosing European Cars over their cheaper Japanese alternatives is that they usually come with a whole bunch of electronics. The Volvo V40 didn’t disappoint.

From keyless push starts to electronic seats that can memorize your preferred settings, the Volvo V40 has it all. These are some of the more notable ones:

As previously mentioned, the V40 uses a keyless system where you literally do NOT have to use your keys at all. Leave it in your pocket if you wish to, but as long as the key is within range of the car, you can literally just open the doors and start the engine.

Perhaps cause we personally drive a Japanese car on a day to day basis, we absolutely loved the automated sun roof.  Talk about star gazing at night, this is as good as it gets without actually having to subject yourself to bugs and mosquitoes.

It didn’t rain when we drove so we sadly cannot attest to this. But we were told that the windscreen has sensors to detect when it rains and the wipers would automatically come up when you need it the most.

The Volvo V40 Cross Country comes with 7 mood light options which lights up strategic areas around the car. You can  even choose a a  red-to-blue setting  that  adapts  the  light  to  the  interior  temperature of the car.  Alternatively,  you can also manually choose between their seven  preset mood themes.

To be honest, this I didn’t really get. The Volvo V40 Cross Country comes with a Lane Keeping Aid where the steering wheel physically vibrates when you are traveling between 65kmph to 200kmph, and get close to a marking or is about to leave the lane. I guess it was a safety feature to prevent the car from getting out of lane or if the driver accidentally falls asleep at the wheel, it is meant to wake the driver and get the car back on track. But I didn’t really get this cause the vibrations weren’t frequent and Im honestly still not too sure what actually activates the aid. This also prove to be alittle bit of a problem when you are trying to change lane and the steering wheel vibrates and tries to stir you back. The vibrations are strong and I believe might prove to be an issue for smaller sized girls who are intentionally want to switch lanes. The good news is that this Lane Keeping Aid can easily be switched off with a push of a button.

To someone who has driven a car with Cruise Control, it probably doesn’t seem like much. But the Cruise Control function is pretty cool and we found it to be especially useful in tunnels such as KPE etc that has strict speed regulations. This feature is made even more awesome with their Road Sign Information that displays the speed limits of that particular road you are on on the dashboard. 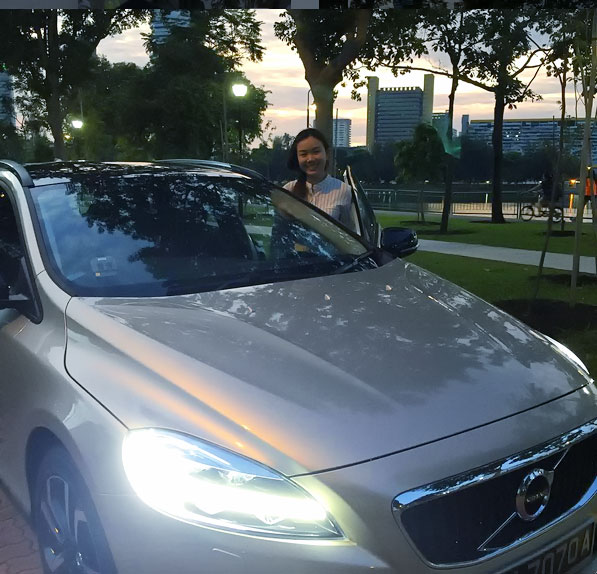 Including COE, the Volvo V40 Cross Country cost SG$180k+, putting it in the range of other European cars such as the Audi A4 and BMW 3 Series.

Putting aside it’s Japanese counterparts, I mean I get it that we pay more for European Cars but SG$180k is still a lot of moo-lahs. For that kind of price I would be expecting a lot more things like leather dashboard etc.

Calling a spade a spade, comparing BMW and Audis to a Volvo seems rather far fetched. When you purchase a BMW or an Audi, you are not just purchasing a car, you purchase the prestige and honor of being able to own a car like that. You flaunt your car on social media and leave your car keys on the table to let people know you drive an Audi or a BMW. When you spend SG$180k, you would want people to know that you spent $180k, because you can. Volvo, as a car brand, honestly isn’t quite there yet.  To spend $180,000 and not have family and friends know that I spent that much because it’s “just” a Volvo, I can see why many would go for it’s BMW or Audi counterparts instead. 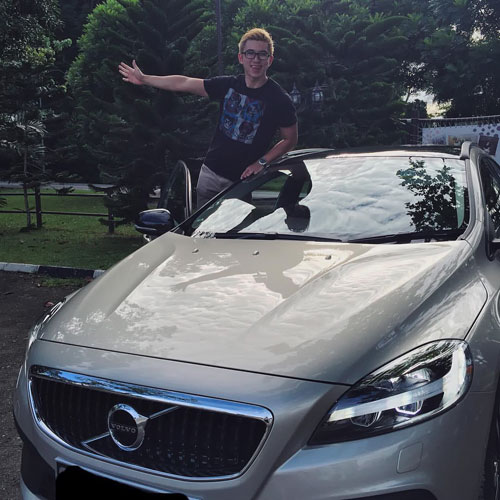 We are honestly not car people. So when the sales person started using words like 190 bhp , direct injection turbo, 300nm torque, ABS and details about it’s chassis etc. We tried to conceal the fact by nodding along, but we were in fact as lost as we would be if we were thrown in Iceland.

So what we can do is to tell you how it actually felt driving.

Spectacular, that’s what it was.

On paper, it states that it’s able to get from 0~100kmph in 7.1 secs. But honestly, it felt much faster. The engine was incredibly responsive and you can tell in an instant that it’s a 1.9L car.

The car has a low centre of gravity which meant that it was extremely stable even at high speeds.

The car responded well to whatever I wanted it to do and it responded quickly. It’s speed comes at an expense of 5.9L/100km but I can assure you how the price of fuel would be the last thing on your mind when you step foot on the accelerators.

We didn’t get the numbers and all that, but for those that are interested, this is their spec sheet:

So the final question then is, after all that writing, would I personally buy it?

Yes, yes I would.

If cash wasn’t an issue (which it is for us at the moment sadly), the Volvo V40 Cross Country is something that we would definitely consider.

I mean yes if you put it in contrast to the BMWs and Audis that you could be getting for that price, it does seem like you are getting something of lesser value.

But some people are not about prestige or wanting to be envied by their friends/family etc, some people don’t care about all that branding. Some people care about who they are and what they want.

The Volvo V40 Cross Country is a very fun car to drive and it leaves me with a smiling face at the end of it all. In a Asian society where competition is everything and with everybody trying to outdo each other(or at least on the surface), many of us tend to forget that that is all that truly matters. Doing things that make YOU happy instead of doing something because that’s what someone else would have done.

Strip away the branding and the thoughts of what others might think, for the same price range, would you get a 1.9L or a 1.4L?

If your answer is a 1.9, you are just like us and the Volvo V40 Cross Country is something you should seriously consider.

But only if it’s in Denim Blue.