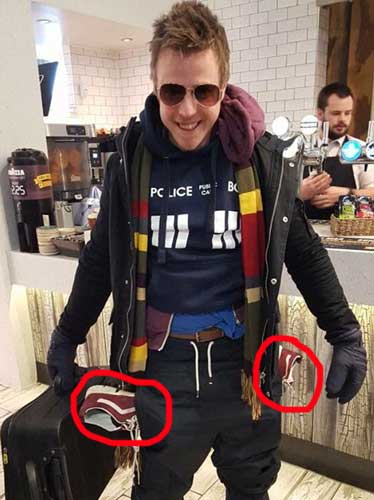 With the introduction of low-cost budget carriers, traveling has never been easier or cheaper! it’s so amazing in more ways than one and we can all now travel to some of the best places via low cost carrier. In fact, just a few weeks ago, our Singapore Travel Blog published an article on the Top 9 beach holidays reachable via Budget carrier.

Setting aside the limited amount of leg space that most of us have learned to bear for that couple of hours of flight time, the only other real issue of flying with low-cost carriers is that most of them would charge for baggage and we are only left with our hand carry bags to pack our 5 days worth of clothes. This would also mean having to rush onto the plane the moment the gates are open to ensure that there’s enough space in the overhead compartment for our bags.

But a British guy may have just found the solution to this hassle. Matt Botten, a British from Cardiff, was scheduled for a low cost carrier flight via Easyjet to Iceland when he decided that he didn’t want to pay for the 45 pound fee of checking in an extra bag that he decided to unload all his contents and don them on himself.

That included jumper, tee shirts, trousers and he even stuffed his pockets with a shoe.

All these saw him being stopped for checks and questioning by the security staff, but is as far as we know, was eventually still let on the flight and flew to Iceland with his partner!

But before you start thinking that it’s a good idea and plan to do the same for your next low cost carrier flight out, we thought that you should also know that this isn’t the first time it happened.

In 2015, a singer in the Scottish band called 5 piece rewind, James McElvar, did the same and decided to wear on him, over 12 layers of clothes to avoid paying for extra baggage.

But midflight, James began to feel a bit dizzy and passed out. He initially thought he was having a heart attack but was later found out that he in fact blacked out cause of heat exhaustion. I guess 6 tee shirts, 4 jumper, 3 jeans, 2 sweat pants, 2 jackets and 2 hats was just too much to handle.

What are some of your ways to save cost during low cost carriers?

Let our travel blog know in the comments below!