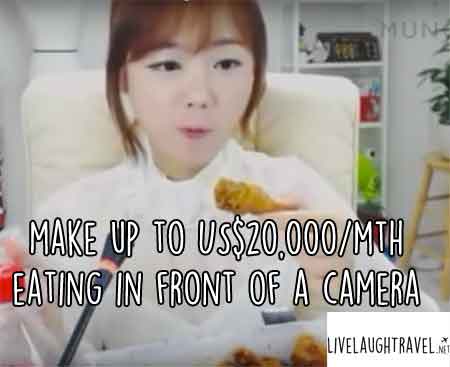 When we first started our Travel Blog, friends and family thought we were insane, that we would never be able to make a living from travel blogging. But of course, at that point of time, we never did put much thought into it as all we wanted to do was share our love for travel and the experiences we gained when traveling. We simply brushed our naysayers off and explain that there are other ways to go about doing it cause we have seen so many famous travel bloggers succeed in doing what they do.

See the problem with Society these days is that just because someone is doing something that is out of the norm, it doesn’t mean it is impossible or crazy.

This theory cant be more evident in the recent trend in Korea called Mukbang, where these stars, known as Broadcast Jockey or BJ (Yes we get the questionable acronym)  for short, basically eat infront of a live streaming audience and actually make a living out of it.

The word Mukbang comes from the mashup of the Korean word Broadcasting and eating. The top broadcast jockeys can have about 300 million view counts and a fan club of over 670 thousand people, with over thousands of people streaming and watching them eat every single day.

These Broadcast Jockeys try ways and means to differentiate themselves through acts like cooking and adding in their own personal taste and style. BJs would often chat with their streaming viewers and viewers would also be able to buy virtual “balloons” for their fav BJs at USD0.10/piece, of which the BJ would earn from. Although USD0.10 doesn’t sound like much, you multiple that by the 670,000 fans previously mentioned and it does add up to a hefty amount.

The top Broadcast Jockey in 2013 earned US$250,000, which amounts to US$20,833/mth, just by eating in front of a camera. A lucrative job which only set back is probably the weight you gain from eating that much.

This then raises the question of the other half of the equation, why would anyone want to watch someone eat? Many have tried to draw the link between it’s mostly teen and young adult viewers to the increasing amount of people living and eating alone. While others feel that it’s a good way to satisfy your hunger cravings without actually eating.

Munchies did a short documentary to uncover the secrets of the Mukbang trend, which I reckon if you have 26mins to spare, is actually rather interesting.

Regardless of the actual reason why people would tune in to watch this Korean phenomenon, we hope that you reading this would realize that there are indeed opportunities out there. So no matter what you do/want to do don’t let them naysayers get you down. I mean, if a kid in Korea can make $20,000 eating, what’s not possible? 😉

Let our Singapore Food Blog know your thoughts on the Mukbang trend? Would you tune in to watch people eat?