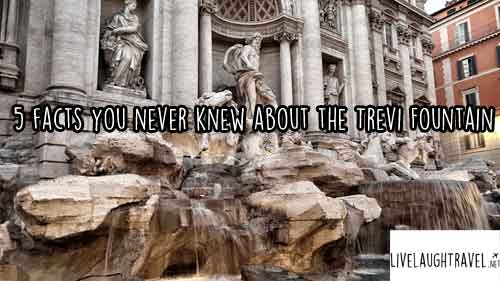 The Trevi Fountain has been a cultural landmark and has been on more than a handful of Hollywood films. The fountain draws millions of visitors to Rome per year, for some, to get that one iconic shot and for others, to test out the legends that surround this beautiful fountain.

Trevi Fountain Fact 1: This fountain was used to supply water to ancient Rome for 400 years

Before Rome and the world is what it is today where water is found simply by turning on a tap, water used to be a rare resource and people have to actually scout and final water points. It is said that in 19 BC with the help of a virgin girl (which is portrayed at the fountain today), Roman soldiers found  this source of pure water which led to the eventual building of an aqueduct to supply water to the city. This served the ancient Romans for 400 years.

When the Pope first organized a contest to design the Trevi Fountain, the competition was fierce but was eventually won by a Florentine, Alessandro Galilei. However, as he wasn’t a native Roman, this led to a public outcry and Nicola Salvi was subsequently elected. Salvi passed in 1751, 21 years after he won the contest with the fountain just half finished. The fountain was only completed 11 years after his death.

We have all heard it. Stand with your back to the fountain and toss a coin over your left shoulder and the legend guarantees you a return to Rome (a second coin for love and a third coin for wedding bells). But what you probably didnt know is that these legends earn the fountain an estimate of €3,000 daily. There, now you can go around telling your friends that a fountain earns more than you.

Trevi Fountain Fact 4: It is illegal to steal from the fountain

While this probably isn’t a surprise, but it is interesting to know that gangs of thieves would organize and sweep the fountain of it’s coins at night.

This is probably also why it is a crime to steal coins from the fountain, because the coins are collected at the end of the day and donated to the Caritas, a charity organization that uses the core values of a Catholic church. Caritas runs worldwide social programs revolving around Food, Disasters, Health/HIV etc. Who would have known your need for love would have actually helped save a life.

The latest renovation and restoration work which lasted from June 14 to Nov 2015 that includes the installation of more than 100 LED lights for a better nighttime illumination, was sponsored by Italian Fashion powerhouse, Fendi, and cost them 2.4 million euros.

And with the renovations work finally done and the Trevi Fountain reopened just a couple of days ago, perhaps it is time for you to make a trip to Trevi Fountain cause if all goes well, our team behind this Singapore Travel Blog would be doing the same in the months to come!

If you’ve already seen the new Trevi Fountain, do let us know how does the night scene look like in the comments below!