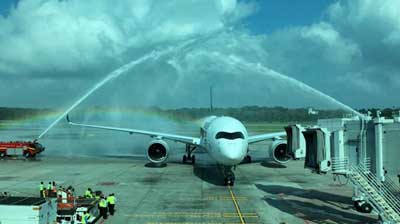 Singapore Airlines (SQ) has always pride themselves as being one of the top airlines in the world that offers extreme comfort and superior service even for long haul flights. This fame and branding it has established over the years has led to even the people behind this Singapore travel blog choosing SQ for most of our flights that exceed 7hrs. But this time, SQ may have just out performed itself with their latest acquisition, the A350.

On the 3rd of March, Singapore airlines welcomed their latest baby, the A350 in a spectacular cannon salute that resulted in a couple of rainbows. The A350, although smaller than the A380, is larger and wider than the Boeing 787. Their seats offer an 18 inch (45cm) width between armrest and 32 inch (81cm) of legroom with the bothersome underseat utility boxes removed.

Your seating area is completed with a 12 inch (30cm) wide HD screen for your on board entertainment, backseat storage with smart phone pocket, 2 USB ports and a universal power outlet that you can use to charge your phone.

But the best part of the A350 is it’s 16.7 million potential shades of LED lighting system that helps to simulate natural phases of the day and fend off jet lag. For example, if you were flying for long distance and the skies turn dark but it’s still dinner time back from where you came from. The LED lighting system is capable of simulating sunset colors and is adjusted based on the passenger’s body clock.

This is top off with an air mangagement system that renews air every 2 mins,the ability to pressurize the plane to a more comfortable level as compared to other planes and a humidification system to decrease skin flakiness, throat scratchiness and dry eyes.

Singapore airlines made an order from airbus for a total of 67 A350s in hopes of resuming the former straight 19hours flight from USA to Singapore. So Americans/Singaporeans rejoice as long haul flights directly to the states would no longer be a hassle in the near future.

Other airlines that currently also carry the A350 in it’s fleet include Vietnam Airlines, Finnair, Qatar airways and TAM. While it is still fairly uncommon at the moment, the A350 is expected to take the aviation world by storm soon with a total of 738 orders from 42 customers.

To find out exactly how amazing the A350 is, there’s even a documentary you can watch about it here about it’s cabon fiber materials and sound reduction ability etc

2016 the last year to see the Northern Lights

With the increase in terror attacks, should we still travel?

Why you musnt bring your pets on your travels