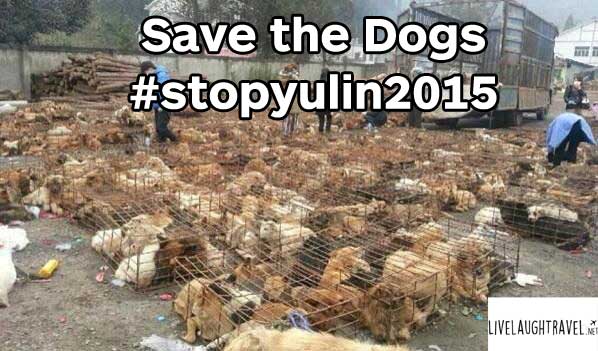 One of the reasons we love to travel, is to learn and see for our eyes the beauty of this world, we try to find beauty in every little thing we chance upon around the globe, and as much as we can, we have tried to be advocates of such throughout our entire Travel Blog.

While this is true for most cases, there are certain things that no matter how hard you try to see, there’s just no beauty or honor in executing. Case in point, the Yulin Dog Meat Festival that happens every year on the 21st of June.

Yulin, one of the 14 cities of Guangxi, China, is a city of natural scenery and hot springs. But the city is more notoriously known for it’s annual Dog meat festival that kills over 10,000 dogs and cats for human consumption.

This event which started as a celebration of Summer solstice, has sparked public and social media outrage across the globe, not just about the fact that it’s Dogs that they are eating, but more of the way dogs are treated during this festival. Some of these dogs that are sometimes snatched from their owners, have their collar still on as they are transported for miles in undersized cages that barely allow the dog to move. These cages often have 3~4 dogs stuffed live into cages and endure days of transportation before they are finally slaughtered but not without enduring even more pain. The locals sometimes burn or boil these dogs live to enhance the “flavor”.

This inhumane treatment has gotten the attention of Celebrities such as Leona Lewis and Richard Marx who have came on-board to petition against the festival with the hashtag #stopyulin2015 that has been flooding social media.

In 2011, another Dog eating Festival, the Jinhua Hutou Dog Meat Festival that has been around for over 600 years since a rebel leader ordered dogs to be killed to prevent the barks from alarming the enemy, was banned by local authorities after social media outrage. And this time, the world is hoping that if enough people get on board, the Yulin Dog Festival can be banned too.

So please join us in this fight against this Inhumane Festival! #stopyulin2015!

There are a million more pictures of the festival online that will make you sick to the gut and we just didn’t want to save those pictures, much less post them here. But If you are still not sold, perhaps this 17mins documentary by VICE would give you abit more insight and change your mind about the festival:

And on a separate note, we would also like to appeal to all to not generalize or stereotype. Being of Asian ethnicity, we are often mistaken for being Chinese and being stereotyped at such. Plus, if you watch the video above, not everyone is the same. There are Chinese people who are animal activist as well, like the lady in the video 15:40, who have spent over USD$14,500 of her own money trying to save these dogs and doing everything she can to stop this festival.

Hate the people who do it, not the race that do. Afterall over 110 million pigs are killed for food every year (some we even do a review about on our Singapore Food Blog) as compared to the 20million dogs per year that are slaughtered in China. What difference is killing pigs and dogs when scientist have proved that no matter the species, dogs, cats, pigs, cows etc, feel pain just like we humans do. On top of that, hundreds of thousands of stray dogs are gunned down around the United states and the globe for no apparent festival and reason.