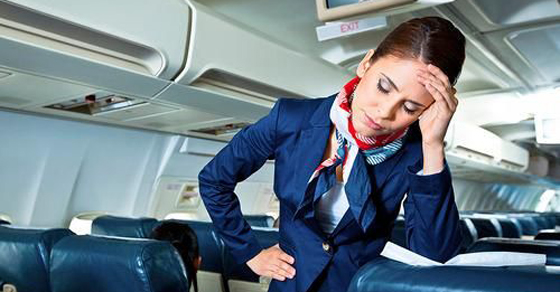 We get it that you are super excited about your trip that you have been planning for over a year but still there is no good reason to treat some one like dirt, some one who is just there to help! If you ask any Flight attendant, they’ll tell you how stressful their job can be. Being a flight attendant is almost like being the equivalent of a class monitor for a bunch of kids who are high on sugar and have been up all night.

In the midst of all the excitement of the trip and wanting the trip to play out as perfectly as you imagine it to be, travelers and tourist can sometimes be a little mean to flight attendants and we have personally witnessed it more than a couple of times. The poor flight attendants who are on duty would still have to politely respond to passenger’s unreasonable requests no matter how demeaning it can be, just because they are on duty.

So for the first time ever, our Singapore Travel Blog decided to do something different and stand on the side of the flight attendants and share with travelers the other side of the picture and allow Flight Attendants to share their grievance as compared to just constantly being complain by passengers for not complying to their unreasonable requests . We asked a group of Flight attendants from various airlines such as Singapore Airlines, Emirates, Saudia Airlines etc, what were some of the most ridiculous requests they have come across and if they could tell passengers what they really feel, what would they say:

When we asked our group of Flight Attendants about unreasonable requests, the immediate reply for almost all of them was with regards to keeping passengers’ bags in the overhead compartment. Many travelers have this misconception that it is part of the Flight Attendant’s duty to do so, but guess what, it isn’t. A flight attendant’s job is to facilitate the things on board, ensure passenger’s safety etc. But among their long list of things to do, helping you stow your heavy bags certainly isnt one of them. Some Flight Attendants do so purely out of Goodwill when they see an elderly having trouble with their bags, but still those are not mandatory and it certainly does not warrant that demeaning “finger flick” that passengers sometimes point to flight attendants while demanding them to help you keep your baggage. Cause at the end of the day, if it is too heavy for you to lift it up, you probably should have paid for baggage and check it in the cargo. The flight attendants are not ratting on you about your over limit baggage, the least you can do is not demand for them to carry it. If you really do need help, ask nicely as how you would when you need help from a stranger on the street and understand that it is not an entitlement.

“You are not the only paying passenger on board”

Yes we get that you paid quite a sum for your flight. Perhaps you even made a conscious decision to pay more for a premium airline instead of choosing a low cost carrier. We get all that and as much as possible, Flight attendants would try to live up to the service standards of the carrier. However, passengers must also understand that you are not the only paying passenger on board and attendants can’t be your personal butler that is constantly at your beg and call. Attendants have other passengers to serve and for all you know, the guy next to you is paying the same price for HIS tickets, if not more. If you needed a personal butler, you can always opt for taking a private plane, but of course that would cost you so much more. So if you can’t afford flying private, don’t expect to have a private butler on board.

Just because attendants are in uniform, it doesn’t instantly make them not human. Just like how Girls would know when guys ogle at them on the street (in their defense, some guys don’t even try to make it discreet these days), Female Flight Attendants/ stewardess know when guy passengers try to check them out or in worst case scenarios, try to look down their blouse. But unlike the streets where girls can just punch you in the face or lash out at you, most stewardess would maintain their professionalism and just try to brush it off. And just because they are too polite to tell you in your face when you try to flirt chat them up, it’s in fact highly annoying and disruptive to their work and other passengers. Understand that just because they’re polite in replying you, it does NOT mean that they are interested. More often than not, to stewardesses, you are just a creepy passenger that they are forced to engage with because they are on their job. Alternatively, you can just head over to Vietjet’s Bikini Clad Flight Attendants where ogling is not just accepted, but welcomed.

“There is really no need to rush off the plane”

It’s your well anticipated holiday and you can’t wait to start exploring the country, but honestly, what does a few seconds of difference really make? We experienced this ourselves first hand even as travelers when passengers would remove their seat belt the very second the plane touches down, blatantly ignoring the Captain’s warnings to remain seated till the plane comes to a complete stop. Flight Attendants are not trying to stop you from exploring the country, nor would they stop you from disembarking and send you back home. What does a few seconds of difference really make that would have passengers trying to rush off the plane?

“If you need something, try to ask them all at once”

Ok you have walked on the isle before right? You know how cramp and small it is. So travelers, if you need something from the steward or stewardess, try to ask them all together at once and preferably during meal and beverage service. It is highly annoying when flight attendants have to rush to the back to get you your coke when the cart JUST walked past you like 5 mins ago and you said nothing. It is once again disruptive to a Flight Attendant’s work flow and well, really just plain annoying.

“You don’t have to stack the meal trays together”

We understand that you are trying to be nice and perhaps that’s what you do at the local Macdonalds where you would stack your trays for the ease of clearing it, but the in-flight cart works slightly differently. Flight attendants would appreciate if passengers would give their food tray back as it is like before. Some passengers thought they can help the steward / stewardess by stacking the trays and save time. But while the flight attendants appreciate the kindness, it doesn’t help them. Stacking the trays makes it hard for the flight attendants to put it back inside the cart as the cart is designed to put the trays one by one.

“Asking for upgrades is a No-No”

Be it in the heat of the moment or as a passing remark, passengers occasionally tell an Attendant upfront that ‘XXX’ airline has better food/entertainment/service. Really? What exact response were you expecting to incite? First of all, Flight attendants are not paid on a commission basis on how many passengers they serve, so when you carrier-hop, they do still get paid. Second of all, what good can come out of saying a statement like that? It’s like someone going up to you and say “John from your middle school is doing so much better than you are now!” Seriously, no good can come out of a statement like that. If you need something, ask nicely and do not be expected to be treated like gods, cause if so, i’m sure the steward / stewardess attending you would too much rather you switch airlines cause they wouldn’t have to serve someone as self-entitled as you.

“You might not realize it, but some of your requests are really weird and unreasonable”

Ask any flight attendant and they are sure to have come across at least one or two weird requests throughout their career. For some reason, people seem to be exceptionally unordinary when in a plane. Here are some of the weirder one’s we have heard:

Flight attendants aren’t slaves. They are there to facilitate and ensure passengers are safe and comfortable throughout our flight. It isn’t an easy job and travelers shouldn’t make it harder. Try and put ourselves in their shoes and a simple gesture such as showing basic human courtesy goes a very long way.

Share this article with your friends and family to help them understand the other side of the picture from a flight attendant’s perspective.

Alternatively, if you are a flight attendant and have come across unreasonable travelers, let us know in our travel blog‘s comment section below and we would add it to the list.