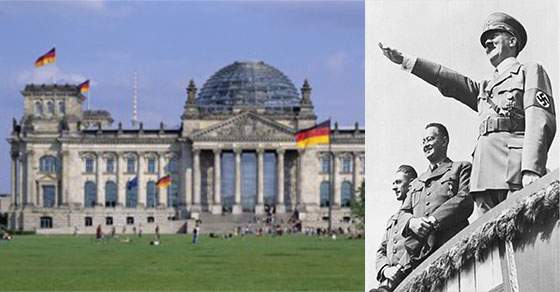 It’s the time of your life and you’re on cloud nine as you’re finally embarking on your long awaited holiday that you’ve been waiting all year for. You wander the streets as you think to yourself why the locals aren’t as excited as you are being in this beautiful country. But perhaps that’s cause although it might be your long awaited holiday, to the locals, it’s just another day. And like our Singapore food blog and travel blog always try to advocate, no matter how excited you are about being on your trip, you are after all still a tourist visiting a foreign land and regardless of where you come from, you should still respect their local cultural as these 2 Chinese tourist learnt the hard way during their recent visit to Germany.

During their visit to Germany, two Chinese Tourist performed the Nazi / Hitler Salute while taking pictures of themselves outside the Reichstag building. The salute, which has been banned in Germany since World War 2, quickly saw the two tourist being arrested by the local authorities.

The banned act was particularly sensitive considering that the Reichstag building in Berlin was once burned down in 1933 after Hitler assumed power. The Nazi then blamed the communist for that arson attack and it was then that they decided to implement laws that restrict the freedom of citizens.

The two tourist were released after paying a $600 bail but could have easily been faced with stiffer penalties or even up to 3 years in prison. This is also not the first time a tourist was arrested after performing the hitler / nazi salute within Germany. In 2011, a Canadian tourist was also arrested and fined after doing the same salute .

Like the 21 year old student who got caught trying to steal a propaganda banner in North Korea, we all should learn to respect the laws and cultural difference of each country. Our excitement and thrill of being a tourist do not automatically grant us immunity for breaking these laws, and the “instagram fame” do not justify the possible consequences.

With that said, chances are that these 2 Chinese tourist didn’t even know that a law like this even exist and was just doing it for “fun”. It is hence important that we use the power of social media for good, and spread the awareness of such laws and warn oru family/friends who might be visiting Germany in the future.