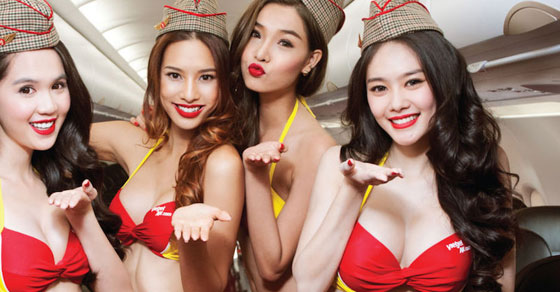 A new airline is on the block and it is literally taking the world by storm!

Vietjet Air which was launched in 2011, is Vietnam’s first modern age privately owned Airlines that is owned by female entrepreneur, Nguyen Thi Phuong Thao. Her 95% ownership of the Airline is expected to make her the first Female Vietnamese Billionaire in just 5 years since she founded the company!

By leveraging on a simple yet direct concept that has been around for ages.

Like almost every airline there is out there, Vietjet Air uses pretty and good looking stewardess on-board their flights. The major difference however, is that in Vietjet Air’s case, their stewardesses are dressed in Bikinis.

We don’t mind people associating the airline with the bikini image. If that makes people happy, then we are happy.” – Nguyen Thi Phuong Thao

Nguyen Thi Phuong Thao mentioned, “You have the right to wear anything you like, either the bikini or the traditional ao dai.” 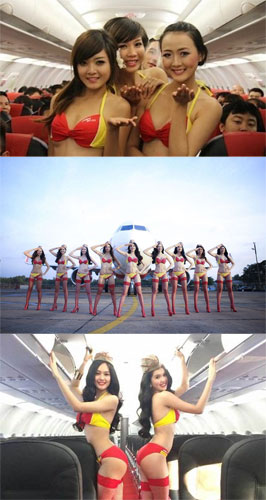 As some would have expected, Vietjet Air did find themselves in the negative spotlight over the years as social media heavily criticized them for using sexy Bikinis as a selling point and were even fined by Vietnam Aviation Authority for conducting a 5 women bikini pageant on board that had the stewardesses competing in a Hawaiian themed dance without first gaining prior approval.

But as the old saying goes, there’s no such thing as bad press.

Even the fines and negative media didn’t seem to stop the progress of the airline as they are set to surpass the nation’s national carrier, Vietnam Airlines, as the country’s biggest domestic carrier.

Vietjet Air today has a fleet of over 35 planes and flies to over 47 destinations both domestically and internationally. Nguyen Thi Phuong Thao stated that she wants to model Vietjet Air after Emirates and aims to be the “Emirates of Asia“.

In 2015, Vietjet Air’s revenue tripled to 10.9 Trillion Vietnamese Dong, of which, net income was about 1 Trillion Dong. Vietjet Air is looking to IPO within the next couple of months with a valuation more than South Korea’s Asiana Airline or Finnair Oyj.

What do you think?

Would you fly in Bikini airlines?

Let us know your thoughts in the comments below!

Perhaps the next time our Singapore Travel Blog heads to Vietnam, we would give Vietjet Air a go and let you guys know how it goes!