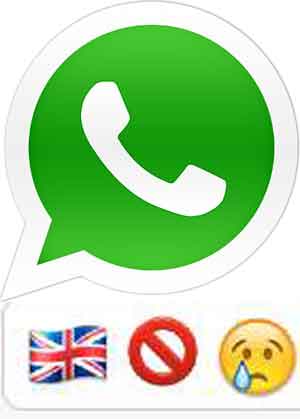 Your phone rings, it might be from your partner, a family member or friend, you don’t know, but you do know that they are probably using Whatsapp. It’s nothing special, nothing extraordinary as they together with everyone else form up the 800 million worldwide users Whatsapp has today.

It’s free (except for the intially $1.99 u pay for the app), doesnt use much data, fast, immediate, filled with emoticons and there’s really not much downside to it. But things might just take a change in the near future, if and when UK decides to ban Whatsapp, along w other platforms such as Facebook Messenger, Snapchat and Skype in UK.

“The first duty of any government, is to keep our country and our people safe -David Cameron, British Prime Minister”

David Cameron, British Prime Minister, has highlighted that in the past, government officials are able to intercept letters, phone calls etc for intelligence gathering. But due to the strong encryption by these Social Media Companies, any messages done through such platforms, no longer go through the government which poses a threat if used by terrorist and/or people on the wrong side of the law looking to communicate and plan stuff.

David Cameron had since proposed a complete ban on strong encryption to prevent any possible means of communication for criminals and terrorist. This was backed up by the Mayor of London, Boris Johnson who said “I’m not interested in this civil liberties stuff. If they’re a threat, I want their emails and calls listened to.”

It was in a way telling Facebook (Owns Whatsapp) and Windows (owns skype) that they have to let the UK government into their encryption or they will ban their services completely. But in Apple’s privacy policy about it’s iMessenger services, it states that “Apple has no way to decrypt iMessage and FaceTime data when it’s in transit between devices. So unlike other companies’ messaging services, Apple doesn’t scan your communications, and we wouldn’t be able to comply with a wiretap order even if we wanted to.” In essence, means that even they themselves are unable to read messages from there, much less allow the UK gov to do so.

When further probed by BBC about the potential of the ban, this was what Downing Street (Prime Minister’s office replied”:

“We recognise the importance of encryption: it keeps people’s personal data and intellectual property secure and ensures safe online commerce.

“But clearly as technology evolves at an ever increasing rate, it is only right that we make sure we keep up to keep our citizens safe. There shouldn’t be a guaranteed safe space for terrorists, criminals and paedophiles to operate beyond the reach of law.

“The Government is clear we need to find a way to work with industry as technology develops to ensure that, with clear oversight and a robust legal framework, the police and intelligence agencies can access the content of communications of terrorists and criminals in order to resolve police investigations and prevent criminal acts.”

So what lies ahead for Whatsapp in UK? Would the gov really ban Whatsapp like what China did to Facebook and Instagram? Would we have to pay for text messages the next time we travel to UK? Nobody knows. I guess, only time would tell.

Read also other articles by our Singapore Travel Blog: