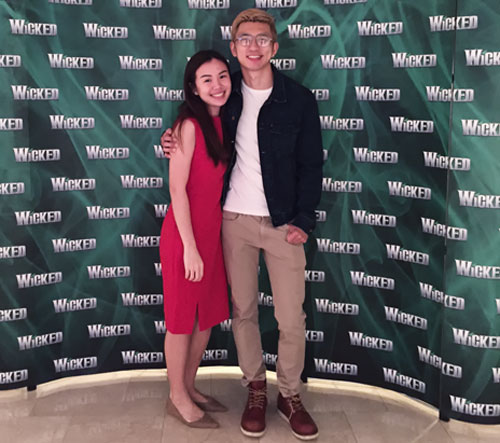 It was Alvin’s birthday recently and we decided to celebrate it by heading to the highly raved about Wicked the Musical which recently just opened at Singapore’s Marina Bay Sands theater.  They came to Singapore several years ago too but due to some unforeseen circumstances, we missed the last one but took extra precaution and made sure that we weren’t going to miss this one as well.

To give you a backstory, it’s the first time our Singapore Food Blog & Travel Blog is doing a Musical review, but it certainly isn’t the first time we have been to one. We are in fact big fans of musicals, and if we could afford, would attend every single one of them (*hints hints Sands Theatre)!

We booked our tickets a couple of months ago when they announced the launch of Wicked to secure the early bird 15% off and managed to get for ourselves the C reserves Tickets on the Grand Circle at SG$110.25/pax (U.P SG$129).

But as the long awaited day finally arrived, we realised that the GRAND circle wasn’t in fact as Grand as the name would like to portray as we were quickly ushered to the 3rd floor of the theater.

As we were seated in the theater, before the play started, we started to wonder if we were indeed seated way too high up and if we could actually see anything from three levels high. But as the lights dimmed out, we were quickly proven wrong. 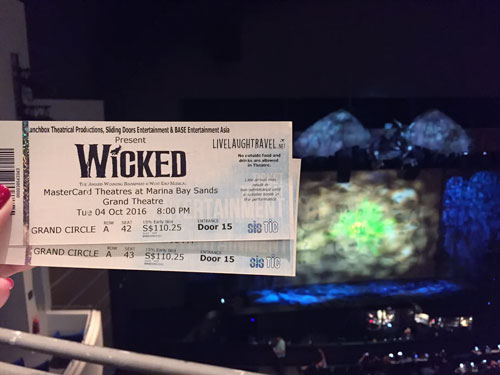 Did being on third floor seem a bit far? Yes. Did we wish that we could see things from eye level? Yes. But did all that matter? No.

The viewing angle did bother us for the first 10mins of the play. But as the story slowly unravels, the cast, their voice and storyline was so good that it draws you right into the play.

Wicked takes about a spinoff from the famous kids tale of “Wizard of Oz”. Throughout the play, less the 20mins intermission, we were kept at the edge of the seats as I personally got so sucked into the story that I couldn’t wait to know “what happens next”.

The voices of the cast, Elphaba (the Witch) in particular, was extremely powerful and captivating that the audience, us included, couldn’t help but applaud each time she sings.

It was an internal conflict between sitting back and just drowning in their voices, and trying to listen attentively to the lyrics to better understand the story.

The only complain if any, was that there wasn’t any props or professional photographer at the “Wicked Wall” (pictured above) that everyone is famously posting on instagram. Perhaps it’s to facilitate human traffic flow and ensure that people move along faster, but taking into account that there’s no photography inside the theatre, most people wanting to commemorate the day have to do it via their phone cameras cause i don’t think anybody brings their professional cameras to a play. Our past experience during Phantom of the Opera was a great one that provided us with the phantom mask etc for the shoot. Sure they charged us $10~20 for the photos, but it was one that we were very willing to pay and is till today, left on the side of my bed.

It was no Lion King, but all in all, it was a great experience and we would recommend anyone who isn’t caught it to do it quickly before they end. Wicked is going to be in Singapore from 29th Sept ~ 20th Nov 16 with single shows everyday from Tuesday to Friday, and double shows every Saturday and Sunday. Tickets start from SG$55 for E reserves to $230 for Emerald tickets. We personally however, probably wouldn’t recommend E reserves as both D and E reserves are on the 4th Floor, a level higher from where we sat, and the E reserve tickets does look relatively far from the stage. If you do decide to get E reserve tickets, you probably should try to bring along a Binoculars of some sort if you have one.