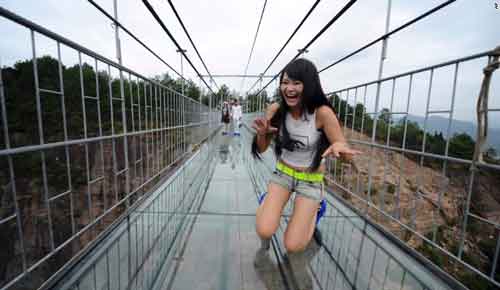 The bridge that used to be made of wood links the two peaks of Stone Buddha Mountain has recently been transformed to one made of glass thanks to 11 engineers who have been working on the bridge for months.

Although there has been other glass bridges like the Sky bridge of Colorado, this is the world’s first suspension glass bridge. Engineers assured the safety of the bridge stating that it is made of glass 25 times stronger than normal window glass. Visitors would also be issued footwear upon arrival in order to safeguard the bridge.

Visitors however have been seen trembling on the bridge and even crawling on all fours as they cross the bridge. The bridge is said to sway and wobble as well when people are crossing it, which just adds on to the whole fear factor experience.

Would you dare to walk on this bridge?

Our Travel Blog have received news that the terrifying new glass bridge in China has cracked less than a month since it opened.

It is understood that it was caused by a steel mug that was dropped by a visitor which resulted in mass panic and caused a small stampede which followed after the incident.

Authorities have since spoken and explained that the bridge is safe and is made of three layers of glass that is able to withstand a weight of 800kg per square meter.

They have explained that the web like crack was the result of the first layer of glass cracking and visitors were never in danger. Nonetheless, the glass bridge has since been closed to visitors.