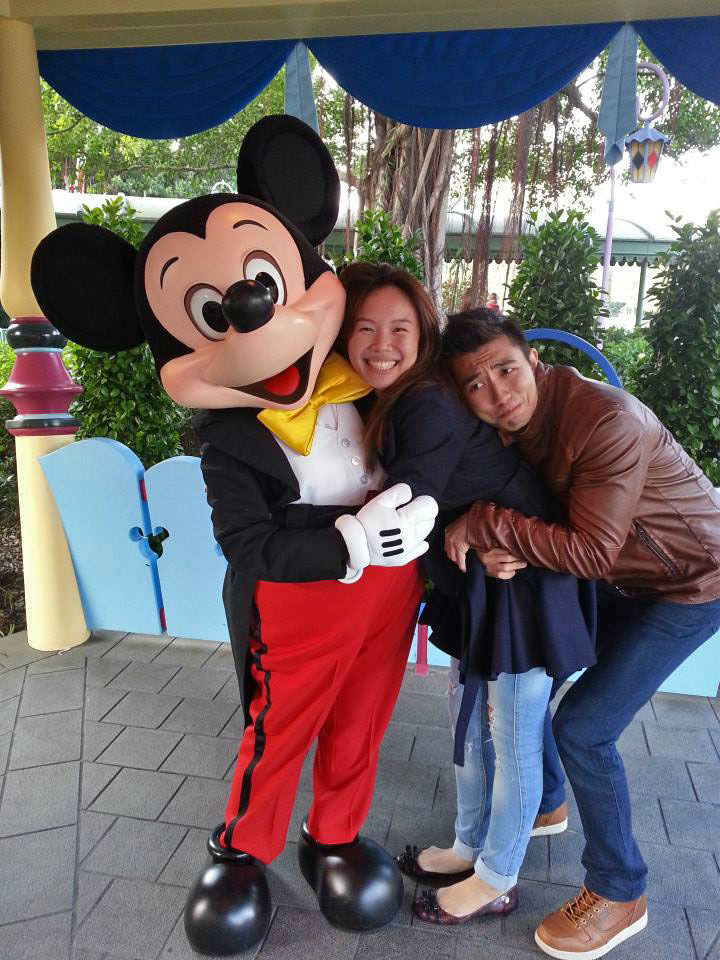 If you’ve always been a Disney fan like our guys at our Singapore Travel blog, you would have known that half the world is crazy about Disneyland. Time is ever so precious when you’re in the park cause there’s ever so many things to do while you only have that much time, you’ll need some nifty tips to fully maximize your time in the park and survive the day especially if its your first time there. It is always common to see legions of fans of all ages decked in costumes running around in the park chasing the Disney characters just to catch a photo with them or literally sprinting to queue for the next attraction, do not be surprised.

1. Plan ahead
2. Be ahead
3. Bring refreshments
4. Get to know the FastPass system
5. Conquer the random wild characters
6. The Secret garbage collector
7. The FREE souvenir
8. Let it go 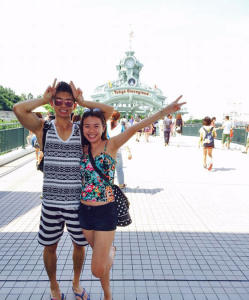 NEVER, visit any Disney Resort unprepared. Plan your entire trip well and know the season that you will be visiting the park. If you are visiting during the summer vacation, be prepared for hours of waiting time! For every minute you spend admiring the scenery and figuring the map while in Disneyland, just might cost you an extra 45mins in the queue for the next attraction.

There are various websites where you will be able to get a copy of the Disney Resort map before you head for your holiday. A good tip is to familiarize yourself with the place, know where are the nearest available restrooms and stores, know which rides are available during your visit, check the show times for the Disney parades, and plan your route beforehand as the last thing you want to do is miss the parade you’ve been dying to watch just cause you’re reaching the end of the queue and don’t want your last 2 hrs spend queuing to go to waste.

It is good to download a park schedule as the opening hours for the park might vary during the seasons.

Japanese are way ahead of you in this aspect. Most of them know the park like the back of their hand and you can easily find hordes of people queuing outside the gates of Disney Resort as early as 1 hour before the park’s opening hours, and yes, this happens everyday, weekdays included! I remember my first trip and we managed to get there before opening hours, when the gates opened, everyone just started running and we ran along probably due to the pressure but had no idea where we were running to (hence the importance of point 1 and point 4). 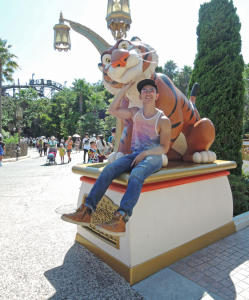 To stay ahead, I’ll always purchase my tickets online as this saves me half the time from queuing for park tickets, and I’d have researched on the “must-take” attractions in the park. That being said, it is still advisable to be early if you do not want to waste time having to queue 2 or 3 hours or even miss out on the best attractions in the park. I.e If you have only set aside 6 hours for Disneyland and each queue takes you 2 hrs(not uncommon), you’ll only get to take 3 rides.

(3) Bring refreshments
Like I said, the queues can get a little crazy with 2 or 3 hours of waiting time. It is always important to still stay hydrated, especially if you’re visiting during the summer vacation *(an umbrella will also come in handy during the summer, as certain parts of the queue can be unsheltered). Pack some snacks, sandwiches and bottles of water in your bag so you’ll be able to grab a bite if you’re feeling hungry in the queue.

(4) Get to know the FastPass system 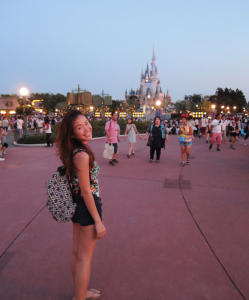 This is by far the best thing that Disneyland has come up with, at least for me. This is a crucial system you NEED to know if you’re aiming for the main attractions in the park, but do note that not all attractions have the FastPass system in place. And unlike Universal Studios, Disney’s FastPass are absolutely FREE! But of course conditions apply.

FastPass is a queue system that allows park guests to significantly reduce their waiting time. This is done so by designating a certain time frame (usually an hour) for guests to return to the attraction and providing them with an express queue when they do. As soon as you have collected your FastPass ticket, you can proceed to wait for another attraction, sight see, eat, do whatever you want around the park etc.

The system is relatively easy to use. FastPass machines are normally situated beside the attraction before the queue. Just insert your park ticket(s) for the machine to scan and your FastPass ticket(s) will slot out into the pocket right in front of you. Keep them well and safe! Note the FastPass return time on your ticket and you can proceed to another attraction of your choice or plan for your next FastPass.

The FastPass system is genius from our point of view, it basically allows you to be in queue while not actually being there. But do note that there is only a limited amount of FastPass per day and that they do run out!

So the next time you’re visiting Disneyland, the first thing you should do is not to rush to your favorite ride like many would, but rush for a Fastpass machine so you’ll have a 2 hours buffer of either being in another queue which essentially puts you in 2 queues at the same time or being technically in a “queue” while you enjoy your disneyland lunch. Because trust me, when you have frequent Disneyland enough throughout all the seasons, you’ll be so glad to only have to queue 60mins for an attraction. 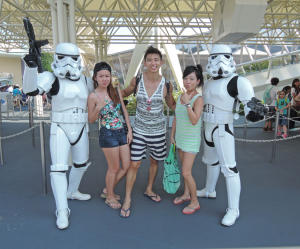 Unlike Mickey, Minnie, Donald, Disney princesses etc which have their own “houses” you can visit as a permanent exhibit (except during parade times) to take picture with them, there are many characters that appear at no specific location and at no specific time. These characters appear at random and chances of bumping into them is highly dependent on your luck. So if you happen to see a character walking around that you like, do try and grab a picture with him/her as he/she might not be there the next time you walk back.

There will most likely be heaps of people swamping around them trying to get a picture like you are, so base on our experience, the best way to get a picture with them (unless you are a kid which the Disney Characters would highly prioritize) is to be helpful. We know you are eager and that you want to have a picture taken, but if you do step back a minute and put your needs down by helping others with their camera to take their picture for them, the Characters usually repay the kindness by offering to take a picture with you next. This has a 95% success rate base on our experience at Disneylands throughout the world so far. But if for some reason, helping a poor family who wants everyone in their photo, to take a picture is too much for you, you can always resort to trying to shouting, pulling, tugging the Character over to your side like the other 1000000 girls around him/her is.

Disney has just this amazing ability to blow our minds and keep us intrigued even at the most unlikely of times. A good example of this is that if you are lucky and you look closely enough, there’s actually a few garbage collectors that’s decked in the exact same uniform as the real garbage collectors do, but are actually street performers. This is a lesser known act as they are not exactly characters or mascots per say, but do well to entertain you for 5mins or so. We’ve so far come across two garbage collectors at Tokyo disneyland, one which draws amazing Disney art using nothing but his broom and water, and another that dances with sound effects from his can (much like the video above). Do let us know in the comments below if you’ve seen other Garbage collectors that do different things. 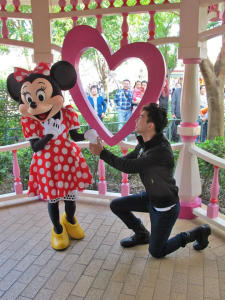 While a keychain can cost an arm or a limb at their Disneyshops, there’s another way to get a very unique souvenir which is absolutely FREE! And because it’s less an known, you’ll probably be the only one among your friends that have it!

While many see them as just Mascots, these Disney Characters are actually well trained personnel under the suit which immerses themselves fully into the character. And one of the things you are allowed to ask for on top of pictures is SIGNATURES! So the next time you visit Mickey/Minnie’s place, instead of just taking a photo with them, bring a pen and a paper and they would gladly sign it for you! No cost, no fees, just pen and paper that gives you a memorable souvenir to show your friends back home! If you want to take it up a notch, i’ve even seen people who buys bags from their disneyshop and get the respective characters to sign on it, talk about a unique gift. 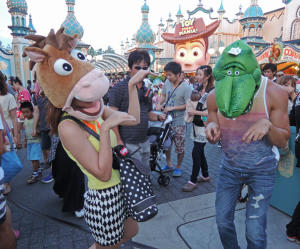 And NO we are not talking about the song from Frozen. One of the main reasons people don’t enjoy themselves as much as they are supposed to at Disneyland is because they do not let themselves go. They feel that they have grown out of it and that it’s all a tad too childish. Well guess what, nobody cares! Nobody cares that you are 40 and still chasing Mickey, nobody cares if you are a professional banker but you are dressed in Goofy ears, nobody cares if you a body builder or a hardcore Muay Thai fighter that screams during the rides, nobody cares if you broke the local crossfit record and have more muscles than skin, nobody cares! And the reason nobody cares is because, everyone else is exactly the same in Disneyland. In Disneyland, lose yourself and your worries of work and what people might/might not think of you behind, you are not you in Disneyland. Disneyland is a comprehensive mega plan specializing in curating smiles! Let youself go, let yourself be the kid in you, let yourself be whatever you want to be, let your worries go, let your stresses free, let it all go! Cause afterall, you are in the HAPPIEST PLACE ON EARTH!