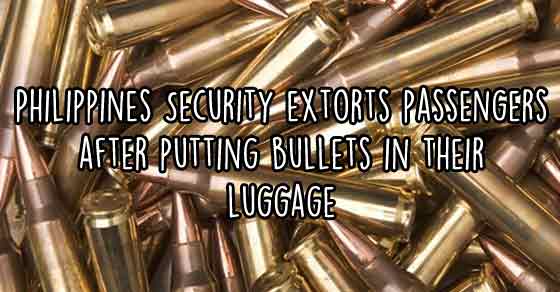 This story is rather infuriating for us cause it does remind us of the Bali police “scam” our Singapore travel blog wrote about awhile ago when we were sort of “scammed” by the local authorities when in Bali. This time, the airport security in the Philippines, whom we trust to prevent smugglers from bringing in illegal objects such as guns, drugs etc, has reportedly been putting bullets in passenger’s luggage, in which they use to subsequently extort them with.

It has been said that both foreigners and locals alike have fall prey to such ethics in the City’s Capital Airport with the latest being a Japanese tourist and a Filipino worker. Some passengers who refused to pay the “imposed” fines caused by the bullets, has even been taken to court. On one such occasion, a 20 year old American Missionary from Florida was jailed for 6 days after refusing to pay bribes to the security staff after they “found” bullets in his luggage. He only finally managed to get out after paying more than $800 in bail.

Legislators have called for a full investigation on this whole “bullet” scam saga and would issue a report on the allegations by 6th Nov.

While we anticipate the report, this also serves as a wake up call for all of us and why our travel blog always always recommend our fellow travelers to use non zipper type luggage if they wishes to check anything in.

While we have no idea how the Airport Security in Philippines did it, we do know how easy it is to break into a zipper bag with the use of just a pen. Watch the following 2 mins video to find out just how ineffective our common methods of locking our zipper bags such as cable tie, padlock etc is in preventing breaking and entering.

While it can be scary to know how easy it is for people to take things away without you realizing till you re-open your luggage at the hotel much later, it is even more scary to think about how someone can just put something in without you ever knowing.

Share this with everyone you care about so they will never fall prey to such underhanded and despicable behavior!