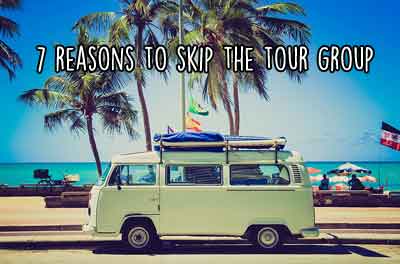 Granted, being in a group of individuals from a similar background or country brings a sense of security, but who needs security when you’re on an adventure. If the thought of going rogue and ditching the tour bus is intimidating for you, don’t worry, it’s supposed to be scary.

But here’s 7 reasons why you should do it anyway

It all gets very mundane, especially if you aren’t in the mood to go for yet another spice tour. If you love that hammock and never want to leave, stay put. The world isn’t going anywhere, let the group go, they probably wouldn’t provide you with enough time to explore the attraction anyway. Like c’mon, 2hours for a theme park and 15mins for a museum?

Guided tours are completely pre-packaged for your benefit. The dining choices will be arranged in such a way that they do not deviate from your unusual chum, with meat and potatoes and wilted salads for vegetables.

The gift shops or restaurants that you go to will most likely be chosen because the proprietors provide a commission to the guides for every group he brings so do not think you are special.

Ditching the group will open your dining possibilities right up. If you want to experience local food served on a banana leaf plate as you sit on cinder blocks, get going to that hut with the locals lined up at the door. Experience your surrounding, the best local cafes/food don’t usually cater to tour groups or find the need to pay tour groups commission to pull customers in. Think about it.

You know that uneasiness you felt in the pit of your stomach when that guy sold you VIP tickets on the next bus out of town? Well you now realize you should have listened to it as you watch a post war death trap drive in with your seat on it. The more time you spend on your own, the better you will be at listening to yourself. Your inner voice is very savvy so please pay attention. Women call it their 6th sense, well, we just call it the Traveler’s gut.

So you thought you’re going to see the tulips bloom in Holland and frolic among the flowers just like you see in the movies. Or perhaps imagined yourself watching the wildebeest migration in the heart of the Masai Mara?

Too bad it’s May and the tulips don’t bloom till June and the wildebeeste already crossed the river. Your lack of planning is at fault, though these are the times you will wish there was a hapless tour guide around for you to scream at.

Nevertheless, you can take a picture of the sun setting behind an acacia tree; just tell the folks back home that the giraffe that was supposed to be in the shot got spooked by the camera flash. Taking responsibility for your trip can be a daunting task. It’s so much easier to know that you have someone planning everything for you, but it’s much like the theory of the Tourist vs Traveler, you want to immerse yourself in the culture and not follow someone’s pre-planned itinerary. Besides, it makes the whole trip so much more exciting when you plan it yourself, trust us on that. Planning often would also help you build on the Traveler’s Gut we previously mentioned.

Many a times, Travel agencies provide you with a super long list of things to do for your 4D3N tour to make you feel like it’s super worth it. There’s 2 problems with that, for one, you usually don’t have the time to really explore the place, it’s mostly more like a touch and go (refer to point 1). And second of all, to make up for the cost of bringing you to so many places, if you really look through the itinerary provided, often, you would Free places such as  “New York Times Square”, “National Botanical Gardens”, “Central Park” etc. These places usually offer Free entry for the general public, or for a very low admission cost. Either way, it would still be far cheaper than what you paid a tour agency for, which at the end of it, only provide you with a transport and a limited time frame to see the place. You can usually just get there on your own via public transport and have as much time as you want at the area.

Tour groups are usually planned for a wide range of audience. From kids to adults to the not as young. It makes sense from a business perspective, to cast a wide net and hope to catch every available fish. But the problem is, what if you are a young couple rearing for adventure and find yourself spending time at a museum talking about history or on a factory tour on how paper is made, things that don’t excite you as much. Face it, we have all been at tours where sometimes just knowing where we are heading to, make you not want to get down the bus, so you rather stay in the bus and use your phone cause that is relatively so much more interesting from your perspective. But it gets a tad frustrating when you think about how you can be playing with your phone back at home too and how you are spending your previous 4 days you have in another country that you have been eagerly anticipating doing so. Forget that! When you plan your own itinerary, plan the things that are catered to your needs and desires, the things that YOU want to do. When you do that, you can also forget about having to visiting some “complimentary” Gem factory at the end of the tour you paid so much for just because the tour guides get a commission if you purchase anything. You only have that much time in a country, do what you love.

Two roads diverged in a wood and I – I took the one less traveled by, and that has made all the difference.

Of all the times we’ve traveled, the best places we have been to are usually the ones we didn’t plan. The ones we chanced upon while getting lost trying to figure our way around. Everyone knows what the Statue of Liberty looks like, but not many, the street art behind the corner of a cafe place. Everyone knows where Disneyland is, not many know about the shrine found in the midst of a park. It’s finds like this that usually makes the best stories.

At the end of the day, just because you ditched the group, does not mean you have to be alone. Companions are everywhere if you need them. Explore, meet and greet and don’t be afraid to ask some local and expatriates where the action is. That hangover in the morning will definitely be worth it and those lame’os who went on the spice tour will consider you as awesome as they come. And if you need any reassurance that it’s possible, know that of all our stories we have written on our Singapore travel blog, almost all of them were done and planned on our own.

Plus, if we really wanted to make friends from around the world, remember that nothing but courage conquers fear so feel free to choose who you want to spend time with, whether it’s the Spanish story teller of the dental hygienist who looks perfectly at home in the red shirt protest in Bangkok regardless of the fact that he’s from the suburbs and drives a minivan.

The things that bring you together should be more than a tour booking.